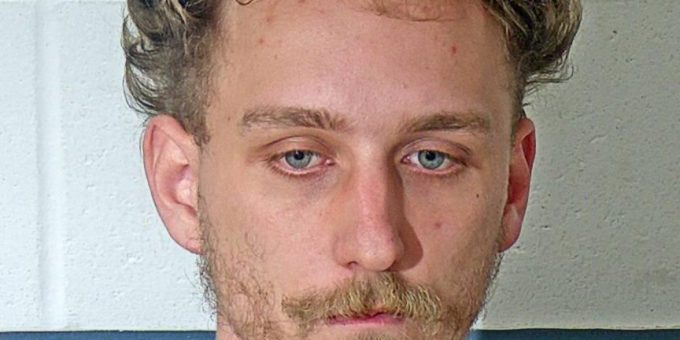 (BEDFORD) – An Orleans man was arrested Saturday morning after a warrant was issued for his arrest.

According to a probable cause affidavit, on the morning of June 9 police were called to a home in Springville after a woman reported her son was having an unknown medical incident and had smashed a church window at Oak Grove Pentecostal Church on Spencer Pike Road.

When police arrived at 6:02 a.m. they spoke with the Perry Volunteer Fire Department who told officers that Hughett said he smashed the window to ‘free the ghosts inside the church.’

Hughett was being treated inside an IU Health Hospital ambulance after suffering a laceration to his right forearm.

Police spoke to Hughett who also appeared to be on some type of drug.

Hughett admitted to damaging property at his residence and at the church. He told police he suffers from anxiety attacks which motivated his actions.

Police walked around the church and found a church door broken and the light turned on in the basement. They found no one else in the church. There was also broken glass inside and outside of the church door. They also found a Bible that had items pulled out of it. The estimated cost to the damaged door was $1,100.

A warrant was issued for Hughett’s arrest on a charge of criminal mischief.