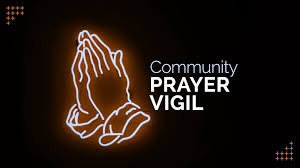 (BEDFORD) – A prayer vigil is scheduled for 8 p.m. Tuesday at Harp Commons in Bedford.

“There will be no speeches, no signs, and no demonstrations,” said Tim Thompson, Pastor of Sherwood Oaks Christian Church in Bedford.

“This is just a time of prayer or a moment of silence. A time to pray for our nation as a whole, issues surrounding the George Floyd situation, police officers, and government leaders,” added Thompson.

Other ministers from Lawrence County will be in attendance including Allen Burris of Mitchell Church of Christ, Nick Mullis of Between the Crowd, and Robert Pendergrass of Lighthouse Baptist Church.

Robert Pendergrass, Pastor of Lighthouse Baptist Church, says it is important to recognize the situation surrounding the George Floyd case in Minnesota.

Pendergrass talked about black male and being pulled over by police. He says that he always had four or five police cars surround him every time he was pulled over.

“I just always sat down, so they did not consider me a threat to them,” said Pendergrass, who moved from Ohio to Bedford.

Pendergrass went to school at Jordan College in Cedar Springs, Michigan and recalls a time when he was pulled over by a police officer.

“One night I was pulled over, and the police stated I had a broken tail light. I got out of the car, went back to my car and my tail lights were all still okay. The officer then proceeded to break the light out with his baton. He said ‘you do now,'” Pendergrass added. “I told him to call my coach; the coach came and told them this man does not smoke or drink and you definitely did not find nothing in his car – let him go,” said Pendergrass.

Recently, Pendergrass opened a church in Tunnleton and many were concerned about him having service there.

“I was run off the road on the way to church with a truck with a confederate flag. The truck just kept coming at me and I hit a mailbox with my mirror,” said Pendergrass.

After getting the church established, relations with the community have improved.

“For the most part, Lawrence County is a faith community, and the issues I described are relatively small compared to other places,” Pendergrass said. “The police officers here in Bedford have treated me fine with no issues at all.”

“I hurt for our country, especially serving as a veteran. Lawrence County is no worse or no better than other places throughout the United States,” Pendergrass concluded.

During the vigil, there will be a toiling of bells and nine minutes of silence for the family of George Floyd. The event on Tuesday is not expected to last more than thirty minutes.