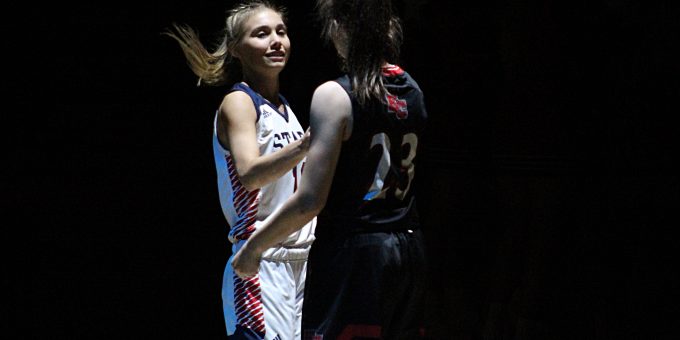 COLUMBUS – Basketball coaches love, are almost addicted to, scouting reports. They spend hours scanning video, hours driving to remote destinations to sit on hard bleachers, hours surfing the Internet for information about the opponent. They would even dumpster dive if they thought it would help shift a game in their favor.

When the foe calls out the set play, they know it by heart. When the situation dictates, they know the numbers and which shooter to foul. When planning their attack, they know the strengths and weaknesses of the enemy like a general in the war room. Nothing is left to chance.

What cannot be measured, condensed into statistics, or discerned on tape are the intangibles: courage, heart, passion, determination, strength of will. Those are revealed under adversity, unveiled under stress, summoned in crisis.

Bedford North Lawrence won a regional crown, matching Ben Davis for the most in state history, on Saturday night, when the guts of a champion flared to the surface in the cauldron of fire. Tested to the breaking point, with the intensity level off the charts, the Stars were brilliant when it mattered most. That skill cannot be calculated.

BNL has had many unforgettable games during program history. Double overtime sectional final with Jeffersonville in 2018. The overtime semistate battle with Lawrence North in 2014. The epic comeback against Roncalli in the 2013 semistate. That’s just a partial list. Now add another.

The title clash with East Central, ending with BNL’s 54-48 triumph, earned a place among the classics. For sheer drama, for remarkable intensity, for heartbreak and human emotion, it belongs somewhere on the register of immortality. Oh sure, as years pass and memories fade, it might twinkle away into the distance. But for those who watched, who were involved, there’ll always be a twinkle in the eye.

East Central coach Kevin Moore had BNL figured out, down to the last detail. His prep work was perfect. His Trojans had the early lead. He knew the Stars on the outside. What he did not know was deep inside each individual kid with BNL on their chest. He called it “out-playing the scouting report.” And he was correct.

Haley Deckard had hit exactly one 3-pointer all season. One of seven attempts. Moore had that memorized. So when she lined up to launch late in the first quarter, with her team in jeopardy, he had to smile. Swish. Wasn’t expecting that. Again in the second quarter. Boom.

How did Deckard do it? Belief in her own abilities, no matter what the report said.

“I knew they were doubling down on Maddie (Webb),” Deckard said. “I was kind of open when I passed it down to her, and when she passed it back, I was wide open. We had shot a lot of threes this week, so I was confident in myself.”

Gracie Crulo-Rood had five treys all year. Five of 17 in 528 minutes. Moore knew that, too. So when GCR lined up, not a soul in the picture frame, to fire from deep with 3 minutes left and BNL clinging to a one-point lead, he probably thought ‘Good.’ It was good, perfect in fact, a shot that led to bedlam on the BNL end and suffering on the other. Guts, taking that shot.

East Central star Josie Trabel was a terror, scoring at will against multiple defenders in the first half. BNL coach Jeff Allen and his staff pointed at GCR at halftime, asked the 5-foot-6 (well, that’s what the roster says) to tackle the 6-foot freshman. Trabel, after totaling 15 in the first half, had 6 in the second, only one basket in the final quarter.

”I tried to play straight up, and when I had the chance try to take the ball,” Crulo-Rood said. “And a lot of help, for sure I needed all the help I could get. It was a little nerve-wracking.”

The Stars could have blinked when Hope Fox drilled a 3-pointer at the halftime buzzer for a 30-28 East Central lead, could have muttered about the prayer baseline shot thrown in by Charsan McCory at the end of the third. Fate was teasing them. They would not flinch.

“We got a little frustrated and rushed when we got down early,” Allen said. “But I told the kids, we’ve been down before. Keep doing what we do. We had to get stops and keep running our stuff.

“That was a heck of a ballgame. We were lucky to get some separation, and they just ran out of time.”

BNL’s second-half performance was excellent, nearing perfection considering the stakes. Every starter hit a shot in the third quarter, and BNL missed only one. Big shots from Chloe McKnight and Crulo-Rood, that steal by Madison Webb and the 60-foot race to the basket for the six-point lead that would finally deny East Central the first regional title in its school history.

“When we went to the locker room, all we talked about was we needed to focus and lock down defensively,” BNL’s Irye Gomez explained. “That’s exactly what we did.”

East Central will be back. The tough Trojans lose only one starter, and Moore will come back smarter than ever, knowing even a scouting report can lie.

“When you’re playing a quality team like Bedford, you have to have all five kids playing their best,” Moore said. “They did.”

BNL had to have its best. Everyone was counting on their teammates, which is why the Stars are better than the sum of the parts. The intangibles don’t add to the calculation, they multiply it.

“When you’re sitting on the bench, it’s the most stressful,” Deckard said. “When you go in, you’re zoned in and you want to do everything for your team, you want to contribute. All of those nerves just shatter, and you’re playing as hard as you can for our teammates.