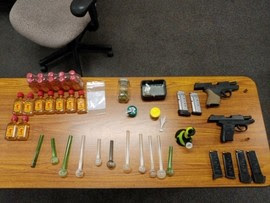 (CLARK CO.) – On Friday, a commercial driving team traveling through Clark County on I-65 was arrested after 911 callers reported their erratic driving to authorities.

Around 7 a.m., Trooper Jonathan Cain responded to reports of a semi-truck driving all over the road and even stopping in the roadway on I-65 southbound near the 23-mile marker.

Trooper Cain located the truck and was able to pull the driver over near the southbound rest park at the 22-mile marker.

As Trooper Cain interviewed the driver, 56-year-old James Robert Whitlock, of Temple, Georgia, he observed suspected drugs and drug paraphernalia in plain sight within the cab of the truck.

Cain also encountered a female co-driver, 29-year-old Alicia Ann Gaylor, of Sarasota, Florida, in the sleeper berth who was initially unresponsive to his questions and did not respond until he and other responding units attempted to administer Narcan.

Further investigation uncovered two handguns in the driver’s possession along with alcohol and marijuana.

Both subjects were transported to the Clark County Jail without incident.