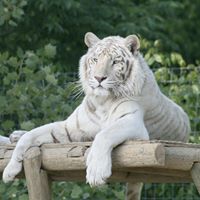 The organization provides rescue, rehabilitation and release for indigenous wildlife and a safe harbor to an array of exotic and endangered species while educating the community.

The ruling states that the organization was rough or excessive when handling animals.

The organization is also accused of failing to provide adequate veterinary care. The ruling also said Stark interfered with several inspections of the property. Officials say Stark was belligerent and rude to inspectors and veterinarians, often cussing them out and threatening them.

“Although Stark credibly testified that he loves his animals and would never intentionally hurt them, the record shows that he inspired trust in the volunteer workers at the subject facilities. The record also shows that Stark violated the AWA on multiple occasions; in many instances showing blatant disregard for the regulation Standards and requirements applicable to him as a licensee.”

According to court records, Stark changed his story on several occasions of the circumstances surrounding the death of a leopard. Officials say that in 2013, Stark euthanized a female leopard by beating her to death with a baseball bat.

“For me to euthanize an animal I do not need to call a veterinarian … If I deem it necessary that an animal is beyond that point, that is my requirement,” Stark told the court. “I always carry some form of staff, stick, or nightstick with me to keep an animal directed to a safe distance if need be. For that reason and for times’ sake this was the method used. I could have easily went and called my veterinarian or whatever but chose to use the bat to avoid having the animal lay there suffering.”

As a result of the recent ruling, the USDA has revoked Stark’s AWA license and fined him $40,000. The USDA also fined the organization $300,000. It is unclear what will happen to the animals.

Stark has 35 days to appeal the ruling and can continue to operate until that time.

File: USDA Decision and OrderDownload
Looking for local stories prior to 2019? Click here