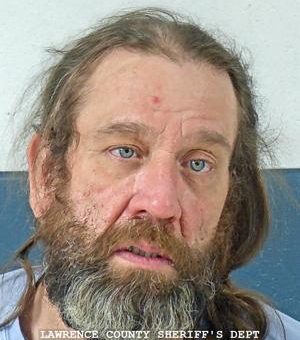 (BEDFORD) – Indiana State Police arrested a Bedford man after they witnessed him throw drugs from the back of a moped on Wednesday afternoon.

Troopers arrested 55-year-old James Sykes on charges of dealing meth, possession of meth, and dealing cocaine or a narcotic drug.

According to Indiana State Police, troopers were conducting surveillance at the home of James Sykes at 1617 E St. because they believed he was dealing meth and heroin.

According to a probable cause affidavit, ISP Trooper Josh Allen saw Sykes leave his home on a moped. Trooper Allen followed him and witnessed Sykes commit two traffic violations. He then called in a marked police vehicle to purse the moped.

Trooper Caleb Garvin observed the moped make a turn without signaling. Garvin attempted to stop the moped, but Sykes attempted to flee. During the pursuit Trooper Garvin witnessed Sykes throw a dark-colored bag from the moped.

As the moped attempted to make a left-hand turn from 15th Street onto N Street, Sykes lost control of the moped and crashed. He was arrested without incident.

Trooper Garvin went back to where Sykes had thrown the item from the moped and found a bag which contained two clear baggies of a crystal substance which appeared to be meth. He also discovered two additional baggies containing a peach-colored substance, four blue foil wrappers each containing a powder substance, a plastic bag containing four peach-colored tablets and one white tablet with marks printed on it. The powder substance in the foil wrappers was consistent with heroin.

While Trooper Garvin was gathering evidence, Trooper Day conducted a search of Sykes and found two cell phones and $840 in cash.

Field tests for the crystal substance returned as meth. The approximate weight of meth in Sykes possession was 7 grams. Another 3 grams of substance gave positive indications of meth. Approximately 3/4 grams of the substances tested as heroin.

Sykes remained in the Lawrence County Jail on Thursday afternoon.