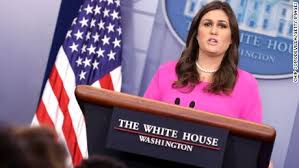 (BLOOMINGTON) – Former Press Secretary for President Donald Trump Sarah Huckabee Sanders will appear in Bloomington in May, to be part of exclusive event held by the Monroe County Republican Party.

Huckabee Sanders has been named one of TIME Magazine’s “40 under 40” and is recognized as one of the best political operatives of her generation, according to a press release.

Tickets to the general admission event are $200 with VIP tickets available at $500.

Tickets are available at MonroeCoGOP.com on a first-come, first-serve, basis.

A party spokesperson said ticket sales will end on March 31, or when tickets sell out.