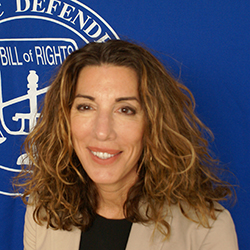 She previously served as a Project Director for the Indiana Public Defender Council and is a graduate of Indiana University McKinney School of Law.

“I am honored and look forward to working with the talented and hard-working attorneys and support staff in the State Public Defender’s Office to serve our clients,” Karozos said.

Upon Owens’ announcement, the Office of Judicial Administration began accepting applications to fill the position. Applications were accepted until October 16.

Finalists for the position were interviewed by the members of the Indiana Supreme Court. The five justices selected Karozos to fill the four-year term.

The State Public Defender is a state-funded Judicial Branch agency that provides representation to indigent incarcerated individuals (including certain juveniles) in post-conviction relief cases to assure the fundamental fairness of the criminal justice system. It provides services in all capital cases. The Office receives about 500 requests from inmates each year asking for their case to be reviewed.