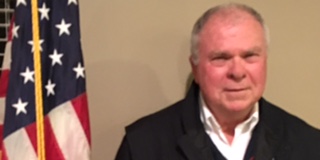 (BEDFORD) – A Tuesday evening caucus was held at the Stone City FOP 94 building with four men expressing interest in Sam Craig’s seat on the Lawrence County Council District 4 which covers the City of Bedford.

Brian Turpen, Sam Craig, Jeff Lytton, Robert Herr, Jim Edwards, Brad Bough, Dan Bortner, Julie Hewetson, and Doug Kellams cast their ballots in the first round for Lytton. The candidates must get five votes in order to win the seat.

Lytton has lived in Lawrence County most of his life. He is a 1965 graduate of Bedford High School and a 1969 graduate of the Indiana University School of Business.

Upon being discharged from the Navy Lytton returned to Bedford and started working for Citizens National Bank, and then Bedford Federal Savings Bank. He then retired in 2008.

Lytton has served two terms on the North Lawrence Community Schools Board of Trustees. He is currently serving as president for the Lawrence County Board of Aviation Commissioners and Assistant Lawrence County Veteran Services officer. He and his wife Bernie (Phillips) have two sons Jeffery S. and Jonathon J.

Due to his placement on the county council, this will leave a vacancy in the Veterans Affairs office. Veterans Officer Brad Bough is currently seeking applicants.