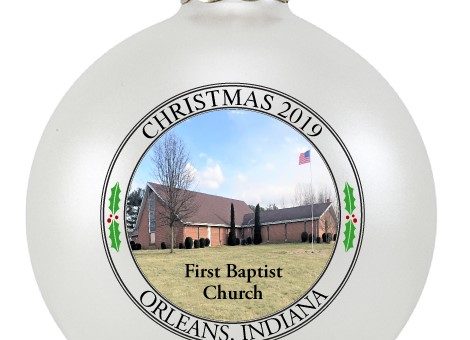 (ORLEANS) – The First Baptist Church is featured on the Orleans Chamber of Commerce 2019 Christmas ornament.

Each ornament sells for $12, and will be available at a number of Orleans businesses, including the Fifth Third and Mid-Southern Savings Banks and Orleans Town Offices while supplies last.

According to Chamber Exec. Director Robert F. Henderson, this year’s holiday keepsake is the 18th in a series commemorating various Orleans landmarks through the years.

The First Baptist Church has a long and interesting history. The church held its first meeting on record in April 1852. The first Pastor was T.N. Robertson.

The Church met at a building on Second Street until moving to the current location on Highway 337 in 1972.

Rev. Greg Matthew is the current pastor. A few of the pastors from the past sixty years include: Alton Cutshall, W. Clyde Polson, Ray French, Wilbur Stone, and Paul Scott.