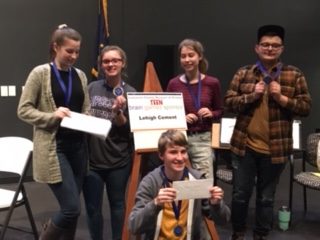 (BEDFORD) – Lehigh Cement won this year’s Teen Brain Games over Pynco 2 with a score of 220 to 60 in the final round.

Norrington’s confidence in his team following game 13 was a good indication that the team would be the overall winners in the finale.

As the evening went on Pynco 1 and Lehigh Cement played in game 13 with Lehigh winning the round with a score of 210 to 130. Pynco 2 beat Bedford Boat Club Woman’s Auxiliary with a final score of 150 to 120.

In the final round for the championship, the Lehigh Team was unstoppable, pulling away from Pynco 2.

“I was very anxious about this evening but we had so much fun competing,” said Kylee Butler, team captain of the Pynco 2 team.

The questions tested the teen’s knowledge in the bible, geography, music, science, and health; just to name a few of the topics that were covered in Tuesday’s contest.

Many members in the audience, including teens, say they had an enjoyable evening supporting a good cause.

All of the teammates of the Lehigh group stated they would be back next year to defend their title. “We are all juniors, a tight-knit group, and we take a lot of hard courses in high school. We will be back next year.”