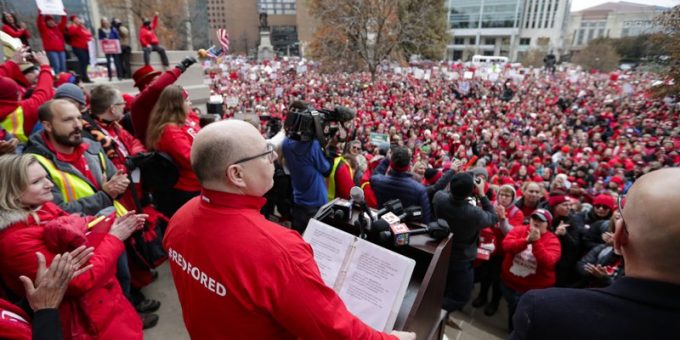 (INDIANAPOLIS) – More than 15,000 teachers rallied at the Statehouse in Indianapolis on Tuesday to try to get lawmakers to make significant changes in education.

More than 145 school districts across Indiana were closed on Tuesday for Red for Ed Action Day. The Indiana State Teachers Association calls it a historic day for education.

“To see that kind of support was just amazing,” said Kevin Giggy, a Mitchell High School teacher who attended Tuesday’s rally. “The office buildings around the Statehouse had the workers at the windows watching it and waving red folders in support of the teachers. People were lined up in the parking garages wearing red and supporting the teachers. A tunnel of people lined the Statehouse and the area around it.”

“Organization Day at the Statehouse was incredible. The Indiana State Teachers Association is estimating over 20,000 people were present,” said Lacy Hawkins, President of the North Lawrence Education Association. “It was nice to be there with teachers and supporters of education from around the state and teachers from North Lawrence Community Schools got to speak with Representative Chris May and Senator Eric Koch; both of whom were very kind to take time to find us in the enormous crowds. We hope that this event signals legislatures that we need change. We care about public schools and no longer can stand for our tax dollars to be taken from them to support vouchers and charters. We want the system of school letter grades rethought because they are based on flawed and troubled tests and are devastating to schools and communities. We need help from our state legislatures and this incredible show of support for our schools. Hopefully this will cause them to turn the tide and bring the pendulum back.”

The three main items on the agenda for this legislative session include teacher compensation, resolving issues with ILEARN and how it impacts teacher evaluations, and repealing externship requirements for teachers renewing their license.

The lawmakers passed legislation that requires teachers to complete 15 hours of workforce-related professional development before they can renew their licenses.

The state replaced the ISTEP test with an ILEARN exam. The ILEARN results are used to calculate the A-F letter grades awarded to Indiana schools and to evaluate teachers. The state spent more than $45 million in a contract with American Institutes for Research to create and implement the tests.

The switch to the new testing could impact schools and teachers who get graded on how well the students perform on the state exams.

“At about 10:30 a.m. the president of the Indiana State Teachers Association spoke with us, followed by the president of the National Education Association,” Giggy concluded. “Today was a very positive day. All the state legislatures were very polite and accommodating to us. It was a very positive day. We marched around the Statehouse. I could not get into the Statehouse; there were just too many people. It would have taken us over two hours just to get in. And it was nice to see some of the school teachers across the state, but this was just an overall positive experience that made us feel good to see the support of so many people.”

Koch and May also met with other school districts in the area they represent including Bartholomew, Brown, and Jackson counties. They spoke with and listened to the concerns of local educators.