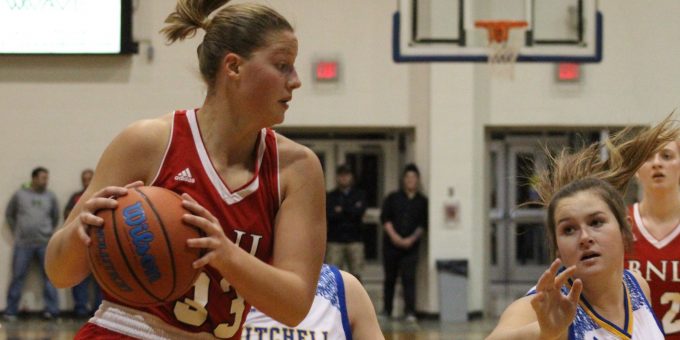 On Saturday night, during halftime of the county-rivalry clash with Mitchell, BNL will place Allen in her deserved place among the elite in school history, retiring her coveted 33 jersey number. She will be the second player in program history (Marla Inman’s No.10 has been encased for history) to receive that honor.

Allen, now playing for Indiana University, certainly warrants the special recognition. She finished as the career scoring leader with 1,930 points and followed Inman as the program’s second Miss Basketball.

“It’s such an honor, with the history of BNL basketball, knowing no one will wear it again,” Allen said. “It was more than just a number. A lot of sweat and tears went in that. So I’m so honored.”

“It’s exciting for her,” BNL coach Jeff Allen said. “It recognizes the hard work she put in here for four years, representing our school and community. It’s well deserved. It’s a special place in my heart since it’s my daughter. Hopefully it will be in the memories of a lot of fans for a long time.”

Allen now wears No.33 for the Hoosiers.

Mitchell (0-1 heading into Friday’s road game at Perry Central) faces its own challenge, perhaps not as exciting. The Bluejackets, with only 12 players in the program, are young, with only two returning starters for second-year coach Jamie Cummings. They suffered a 46-31 loss to Lanesville in their opener, committing 26 turnovers while Mylea Slone came off the bench as the scoring leader with 8 points.

“We want to compete each and every day,” Cummings said as he looks to build on the 7-16 record from last year. “We’re going to see one of the best teams in the state, so it will be a learning experience for us.”

BNL has dominated the series, winning 10 straight by an average of 42 points. Last year, the Stars were merciless with a 26-point run in the first half, leading to a 36-6 advantage and finally a 68-33 triumph.

“It’s all about how you progress throughout the year. It’s a county rivalry game, and the kids get fired up to play that game. I think the kids will want to come out and represent BNL in a good way.”

Last meeting: Last year at Mitchell, BNL blasted to a 68-33 victory. Jorie Allen scored 18 points and Jacy Hughes added 14 for the Stars, who scored 26 straight points in the first half and had a 30-point lead after 12 minutes. Macy Robbins had 12 points for the Bluejackets.

Game notes: BNL has now 10 straight in the series since Mitchell’s 65-47 win during the 2008-09 season. BNL’s average winning margin during the streak has been 42.3 points per game.