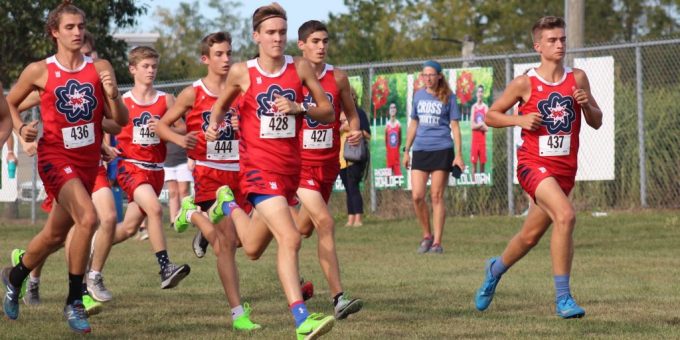 (BEDFORD) – Bedford North Lawrence’s meandering cross country course finishes with a short-but-sharp uphill climb to the conclusion, which is just the type of finish the Stars except in Saturday’s regional run.

BNL faces an uphill climb to its goal, an invitation to the IHSAA semistate at Brown County.

If the regional field was ranked by seedings, the Stars would likely be in the sixth spot. They finished behind No.7 Bloomington South and No.20 Bloomington North in the sectional last week, and they were behind regional qualifiers Northview, Terre Haute North and Terre Haute South during the Ted Fox Invitational on their home course earlier this season.

Problem – the top five teams in the regional will advance to the third round of the state tournament series. Sixth would be staying home.

Solution – run faster. Target the catchable teams (especially the three from the Terre Haute sectional) and qualify for the semistate for the first time since winning that stage in 2012.

“We have to have an A-plus race from everyone,” BNL coach Jon Calhoun said. “And we know Eastern Pekin (which finished one point behind BNL in the sectional) has put an bull‘s-eye on us.

“So in my mind, everyone has to run 15 seconds faster – which is a hard task, but if you think about it that’s only a couple of seconds faster per mile.”

Oh sure, just a couple of seconds per mile for a 5K sprint against elite competition. But BNL might be equipped to climb that hill.

First, the Stars are on home ground, where they practice every day, where they’re already run four competitive events. That’s an edge. “It should be,” Calhoun said. “We run this course every day, so we know when to go, what points we have to make our move, what we can expect.”

Second, BNL has a bonafide race leader in senior Cooper Holmes, an individual semistate qualifier last season who was 10th in the sectional in a smooth 16:45.97. But the real scoring key to BNL’s sectional romp was the pack of three runners who crossed within three seconds of each other (at the 17:53 mark). If juniors Brayden Lanham and Isaac Williams, plus senior Ethan Vaughn, can duplicate that charge, plus get a lift from freshman Cole Baker or sophomore Colton Sons, BNL could be in contention for one of those coveted golden tickets to the next level.

“That was a surprise,” Calhoun said of BNL’s cluster last week, noticing during a mock meet by times that BNL’s average distance between runners 1-5 was among the worst in the field. “We had a better 2-5 split than everyone else, which really helped out.”

Third, the Stars can run fast and free from the tension of expectations. They didn’t make it to this round a year ago, so every stride now is new territory.

“It’s a great testament to what we did this summer, all the work and miles we pushed,” Calhoun said. “Our team mentality was better overall, and it really caused us to work harder. To see that flourish, and resonate, and get us here is really promising.

“Getting to the semistate is a big jump, but it will help the team in the future and the confidence level.”

The top 10 individuals who are not members of advancing teams will also qualify for the semistate on Oct. 26.