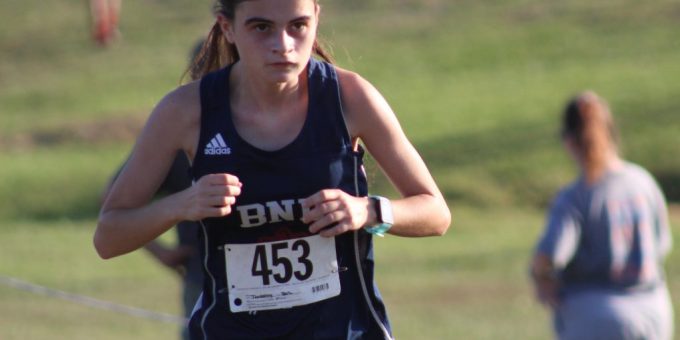 (BEDFORD) – Bedford North Lawrence coach Jill Vance took her cross country team on a “haunted” tour of the town’s ghostly spots on Tuesday afternoon. The point? Perhaps her runners should not be afraid of anything.

Three Stars, all of them underclassmen, will compete as individuals in Saturday’s IHSAA regional at BNL, hoping to finish among the top 10 runners who are not members of qualifying teams and earn an invitation to the semistate at Brown County on Oct. 26.

That’s a scary task for Grace Tanksley, Lindley Steele and Myra Roberts, given the competition in the field as team and individual qualifiers from the sectionals at BNL and Terre Haute will convene for the 5K, two-lap tour of BNL’s testy course.

“Advancing on is a great accomplishment,” Vance said. “There’s been a lot of miles, and we’ve all been dealing with injuries. We ran from the start of the summer to now to get to this point, so it’s a lot of work to make it this far.”

Tanksley, a sophomore who finished 16th in the sectional in 21:16.17, is in the best position to advance. She ran in last year’s regional when BNL made it as a team, and if Vance’s prediction of a 21-minute cutoff to earn one of the spots is correct, she’s already close.

“I’m definitely going to try and trail the top teams, stay with them the entire time,” Tanksley said. “It will be challenging.”

Steele, also a sophomore, was 34th in the sectional in 23:39.20. She has made the adjustment to long-distance running in style.

“It’s been a really good experience, lots of fun,” Steele said. “I’ve learned how to run long distances. I’ve never really done that before this year. I want to get down at least a minute.”

Roberts, who qualified for last year’s semistate, has battled a hip injury all season, and she claimed the final regional spot while finishing 36th in the sectional in 24:22.34. “I’m just happy to continue,” Roberts said. “My friends have been keeping me motivated. I’m just going to leave it all out there.”

“She’s experienced this already so she knows what it will be like,” Vance said. “She’s competitive, and the more competitive it gets, the more you can get pulled along.”

BNL will have the home-course edge.

“From a runner’s perspective, it gets tiring running the same thing over and over again, but it’s a big advantage in that we know that course backward and forward,” Vance said. “We know the strong points and weak points.

“We just need to relax. The one advantage of having no seniors on your team is nobody graduates. Everybody will have the experience to build on for next year. That’s definitely a plus.”

The top teams in the field will include No.5 Bloomington North, No.11 Bloomington South and Northview (the sectional champion at Terre Haute). Defending regional champion Annalyssa Crain of Edgewood is expected to be the favorite to win individual honors.

The top five teams will also advance to the semistate.