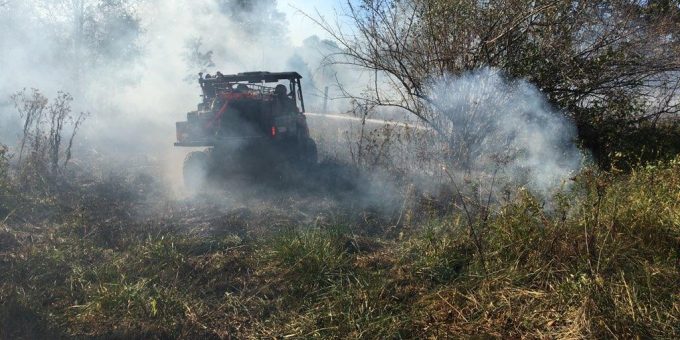 (BEDFORD) – Around 3:40 p.m. Tuesday afternoon a large field fire broke out in the 2700 block of South I Street near the Bedford city limits. The fire was discovered by a Bedford Fire Department firefighter who saw the large plume of black smoke while they were at Jackson’s Mini Mart on Mitchell Road.

It took firefighters more an hour to bring the fire under control.  The dry and windy conditions caused the fire to spread quickly.

At this time the cause of the fire is undetermined.

In addition, to these field fires, several Lawrence County departments have been dispatched to illegal burns in Indian Creek, Perry, Marshall, Marion, and Shawswick Townships.

According to Emergency Management Director Valarie Lachuer, no one has been fined at this point. But, they can be fined up to $2,500 for deliberately ignoring the burn bans.

More than 21 counties have burn bans in effect, with Ripley County the only county who allowed their burn ban to expire.

On Friday, rain is in the forecast and it is unknown whether it will be enough to discontinue the burn ban.

The ban was issued to protect the lives and property of residents in Lawrence County.

Anyone violating this proclamation could be cited and fined or subject to criminal charges should a fire result in personal or property damage.

The following is the Emergency Proclamation:

Whereas, Lawrence County, Indiana is immediately threatened by a natural disaster-specifically county-wide drought conditions, and; Whereas, as of September 25, 2019, we find our county to be at risk of widespread fire hazards because of the ongoing drought conditions and;

Whereas, a county-wide burn ban affecting certain activities is an appropriate public safety response to the fire hazards presented by the Current drought conditions;

Now, therefore, we, the Lawrence County Board of Commissioners, declare, pursuant to the provisions of IC 10-14-3-29, that a state of emergency exists in the county and that we hereby invoke and declare those portions of the Indiana Code which are applicable to the conditions and have caused the issuance of this proclamation, to be in full force and effect in the county for the exercise of all necessary emergency authority for protection of the lives and property of the people of Lawrence County.

We also declare that effective immediately, the following activities are prohibited in Lawrence County:

1. campfires and other recreational fires, unless enclosed in a fire ring with dimensions of 23 inches in diameter X 6 inches high or larger;

2. open burning of any kind using conventional fuel such as wood, or other combustible matter, with the exception of grills fueled by charcoal briquettes or propane;

3. the burning of debris, such as timber or vegetation, including such debris that results from building construction activities and/or wind storm debris; and

4. the use of burn barrels for any open burning at residential structures. Charcoal from permitted grills shall not be removed from the grills until the charcoal has been thoroughly extinguished.

In addition, we strongly encourage our residents to attend public displays of fireworks and limit their personal use of fireworks to those that do not leave the ground, and that they refrain from using aerial firework devices, Reference is hereby made to all appropriate laws, statutes, ordinances and resolutions, and particularly to Section 10-14-3-29 of the Indiana Code. (Reference: Lawrence County Emergency Management Ordinance 93-10)

All public offices and employees of Lawrence County are hereby directed to exercise the utmost diligence in the discharge of duties required of them for the duration of the emergency and in execution of emergency laws, regulations, and directives whether state or local.

Anyone violating this proclamation could be cited and fined or subject to criminal charges should a fire result in personal or property damage. All residents are called upon and directed to comply with necessary emergency measures, to cooperate with public officials and disaster services in executing emergency operations plans, and to obey and comply with the lawful directions of properly identified officers. This burn ban shall be in force immediately and will remain in force indefinitely while drought conditions continue.

LAWRENCE COUNTY BOARD OF COMMISSIONERS: