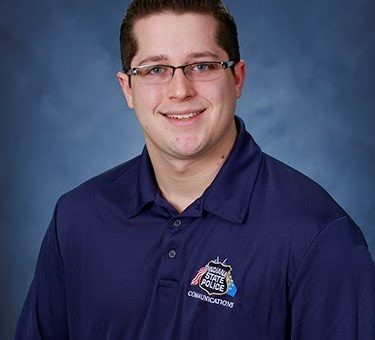 Since 2015, Hunter Sanders has been dispatching and assisting troopers in what is commonly referred to as Area III (Southwest Indiana). Currently of Ellettsville, Hunter lives with his wife Colte and their 4-month-old son.

A graduate of Edgewood High School, Hunter joined the Indiana State Police after working in different jobs that included Barista work at Starbucks and another job at the IGA Grocery Store.

Hunter says his favorite part of dispatching is the people he has the privilege to work with. When asked, Hunter said he sees himself still with the State Police in five years.

Region 3 Supervisor Leesa Slover said, “Hunter is a hard worker and his fun personality makes what sometimes could be a rough shift, go a little faster! We appreciate Hunter’s service.”

We would like to recognize Hunter Sanders as ISP Region 3 Featured Dispatcher of the Month.

Thank you for your commitment, reliability, and service Hunter!