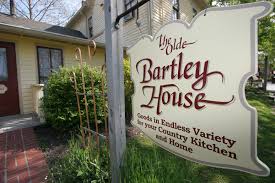 (NASHVILLE) – About one-third of the businesses in downtown Nashville, Indiana are about to be auctioned off.

The Andy Rogers Estate auction is set for Wednesday, October 30 at 1 p.m. at the Brown County History Center in Nashville. Bids will be taken in person, as well as over the phone and internet, said Tim Ellis, who is conducting the auction with Jimmie Dean Coffey.

The 16 properties belong to Andy Rogers, of Nashville, who died last year. Many of which include multiple shops in the heart of this tourist destination. On auction are at least eight vacant parcels and eight buildings in Nashville — including the homes of 25 downtown shops.

According to Jane Gore, Nashville Town Council President, his family decided to sell his remaining properties, except for the Nashville House restaurant, which they plan to keep.

Ellis estimated the dollar value of all the properties on the sale list represented “about 35 percent of downtown Nashville.” Based on their property cards posted on the county’s GIS map, their assessed value for tax purposes is about $3.4 million altogether.

An 855-square-foot log cabin at 108 Town Hill Road, on about a half-acre, also will be auctioned. According to the listing on the auction company’s website, it is being used as a rental and has no septic system or sewer connection, just a holding tank.

The Seven Lots for Auction:

The properties on auction are listed, with tax information, rental income, pictures, and other data, on the auction company’s website, ucpropertyauction.com.

Bidders interested in seeing them in person can attend a preview at 1 p.m. Monday, Oct. 14. Private appointments also can be made.

On the day of the auction, bidders will need to bring a photo ID, a $5,000 check made out to themselves, and a written opening bid in order to register. High bidders will see a 10-percent “buyer’s premium” added to their final bid as a way to defray auction costs, Ellis said. That buyer’s premium will be nonrefundable and due at the close of the auction, with the balance of the purchase price due upon closing of the sale at the end of November.

The heirs have had the properties appraised so that they know their value, and they have a minimum “reserve” price in mind, Ellis said.

The town fears the new owners could decide to demolish the buildings.

“Certainly there are concerned about buildings coming down,” said David Martin, a member of the Peaceful Valley Heritage group, which has pushed for historic preservation in Nashville. “My worst fear is it’ll change the whole overall outlook of the community.”

But protecting these buildings is a challenge because the Town of Nashville doesn’t have a historic preservation ordinance. So last week, they created new rules to make it tougher to tear down historic structures.

The council is in the process of expanding its demolition ordinance passing an ordinance last week that before someone could knock down a building more than 50 years old, they’d have to go through a review by the council.