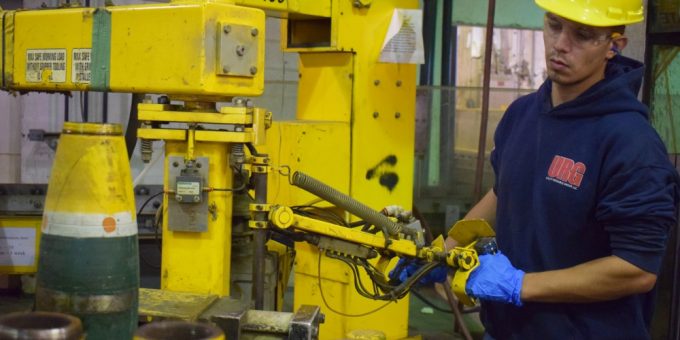 (CRANE) – Due to the nature of Crane Army’s mission to provide munitions readiness to warfighters, ensuring the proper handling of these dangerous explosives is CAAA’s hallmark. This includes demilitarizing, or destroying, out-of-service ammunition.

Ammonium picrate, commonly known as Yellow D due to its bright color, was widely used in the 20th century before being made largely obsolete through the development of safer, less toxic munitions that pose less risk to the environment.

“Yellow D is pretty toxic, flammable and reactive,” Wright said. “We try to avoid using it because it’s not safe. We especially don’t want it getting out into the environment since it’s water-soluble and can easily contaminate water sources. It will also stain everything it touches yellow- skin, clothes, everything.”

“Since Yellow D is a fine powder, you can’t ensure it will be completely destroyed by detonating or burning,” Wright said. “Anything left could easily get into the environment and bodies of water.”

Crane Army partnered with contractor Gradient Technology to implement a solution for ammonium picrate demilitarization. The CAAA workforce renders the explosives inert before Gradient employees use the company’s proprietary process to chemically convert Yellow D into ammonium nitrate and picric acid for resale.

“Anything explosive Crane Army has to process,” Cowell said. “We load the live rounds onto a conveyer belt that transports them down the line. At the end a water jet system cuts the base of the metal body off the round and washes out the Yellow D.”

Ammonium picrate is rendered inert when it dissolves in water. At that point, Crane Army no longer has to manage the material.

“Once the Yellow D comes in contact with water, it’s no longer considered an explosive,” Cowell said. “That’s when Gradient takes ownership. The Yellow D slurry enters these giant tanks and goes through Gradient’s conversion process. It comes out on the other side as picric acid, ammonium nitrate, and other components. It’s mind-boggling, really.”

Both Crane Army’s and Gradient’s systems keep all materials contained, especially chemicals like toluene used in the conversion process.

“It’s a closed system,” Crane Army Mechanical Engineer Sonny Dant said. “Nothing escapes the building without being reused or recycled. Toluene is used to help separate the different components out before being captured and used again. Gradient sends metal projectile bodies to a local recycler. The ammonium nitrate is used for fertilizer and the picric acid is used in leather tanning. Nothing goes to the landfill.”

“We’re always keeping two eyes on Yellow D,” Wright said. “We are constantly tracking where it’s going, where it’s at now, where it’s being stored. We constantly check on the demilitarization process too.”

Crane Army’s mission is to provide conventional munitions support for U.S. Army and Joint Force readiness. It is one of 17 installations of the Joint Munitions Command and one of 23 organic industrial bases under the U.S. Army Materiel Command, which include arsenals, depots, activities and ammunition plants.