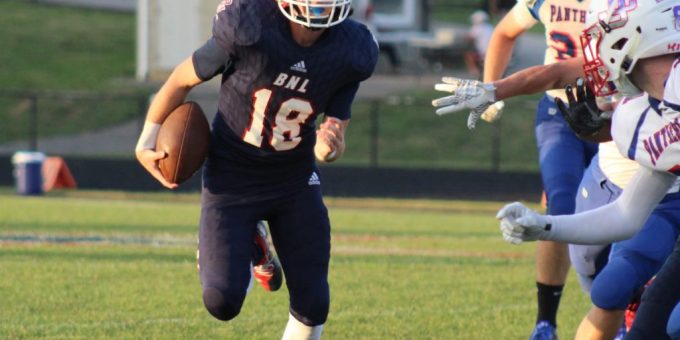 (BEDFORD) – Change can be painful, scary, unsettling. But if insanity, as defined by a quote credited to Albert Einstein, is expecting a different results from repeated circumstances, then Bedford North Lawrence would be crazy not to adjust.

Coming off a demoralizing 21-20 loss to Madison, the Stars (1-3) now turn into the most brutal part of the 2019 campaign – back-to-back battles with ranked opponents preceding a clash with the defending Hoosier Hills Conference champion, starting with Class 5A No.15 Seymour on Friday night.

Einstein genius isn’t necessary to find a solution for the Stars. Football is not rocket science. Dedication plus passion usually equals success is the sport’s E=mC^2. BNL will need to check its math as it prepares for this test.

“Flat out, if they don’t work hard and don’t want to go on the field and battle, compete, then we’ll see a lot of changes,” BNL coach Steve Weber said. “There’s no need to keep playing at that level. And I’m not to the point to just working on next year, because I think we can do something in the sectional. I really do. But it has to be a two-way street. They have to believe and want it as well.

While BNL has wallowed in suffering since the disappointing Homecoming loss to the Cubs, Seymour is on the opposite end of the confidence spectrum. The Owls are 4-0 (for the first time in 18 years) after winning three straight conference road games (last accomplished in 2005).

Seymour’s dynamic offense (37.3 points per game) is run dominant. Running back Chandler Drummond ranks 12th in the state with 638 rushing yards (averaging 6.6 per carry) and 6 touchdowns. Veteran quarterback Brendan Smith adds another weapon in the backfield with 272 rushing yards and 5 TDs. He’s also thrown for 494 yards and 5 scores.

Seymour’s defense has also been solid while forcing 9 turnovers and recording 8 sacks.

“The guys have been working their tails off in the weight room in preparation for this year,” Seymour coach Michael Kelly said. “They bought into what we think it takes to be good. They’ve performed well.”

“The quarterback is a tough kid,” Weber said. “He runs the ball well. What stuck out to me is his toughness. That running back finds the holes. What they do, they do very well.”

What can BNL do well? Good question. The triple-option offense, the normal thing most counted on for consistency, has been slowed by injuries to key personnel, particularly at running back. Skyler Bates will miss at least two more weeks. His backup, Jerred Floerke, is now questionable, and wingback Tabin Stillions is under medical supervision with a sore shoulder. The Stars are running out of bodies and options.

“To be honest, a lot of the changes we want to do or can do is hampered by injuries,” Weber said. “We’re really handcuffed. It comes down to people and personnel. By sectional time, we have to find that right mix, whatever that is.”

Seymour’s current standing atop the HHC is the result of wins over Jeffersonville (28-21), Madison (49-7) and Jennings County (42-21). The score comparison with the Cubs is troubling, although the Owls had a tougher time with Jennings than BNL – whatever that’s worth.

“The fact they lost last week is concerning,” Kelly said. “They’ll be fired up and ready to go. Sometimes you tend to overlook opponents and underestimate what they’re capable of doing.

“I’m not sure the Madison loss was that big a surprise because I knew how good Madison is. But BNL has several defensive starters back and a good quarterback that can throw the ball vertically. They have several guys that can make big plays.”﻿

Last meeting: Last year at BNL, McCall Ray ran for 103 yards and Wyatt Martin scored twice as the Stars clipped the Owls 27-19. Seymour’s Nathan O’Mara ran for 177 yards on 39 carries, but the Owls were guilty of 10 penalties.