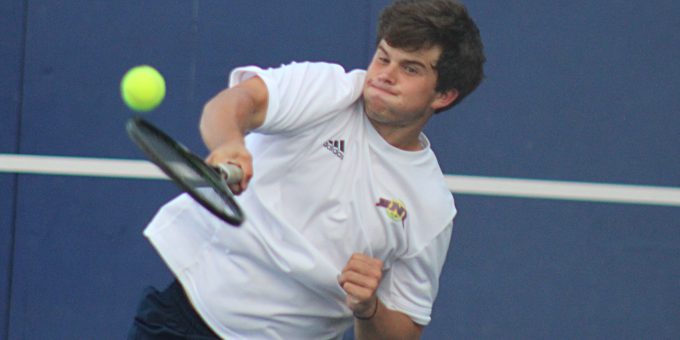 (BEDFORD) – Konley Woodward had a choice to fill his free time: part-time job or full-time tennis. His decision hurt his wallet, but Bedford North Lawrence’s tennis team has gotten a little richer.

After a two-year absence, Woodward has returned to the courts this season, and he’s found a perfect-fit partner in Steven Graham at No.2 doubles. They worked their magic together as the Stars conquered Paoli 4-1 on Monday afternoon.

Woodward and Graham were half the doubles sweep that powered the Stars past the young, rebuilding Rams. They conquered Treyvin Street and Isaac McBride 7-6 (7-3 in the tiebreaker), 6-3.

“We do different things and benefit by it,” Woodward said. “What was tough was going from singles (which he last played in middle school) to doubles. I had to learn how to play doubles, which was hard. My serving wasn’t very good.”

Cameron Gratzer and Wyatt Scherschel continued their slick play, enough to cement their spot in the lineup for the rest of the season, rolling to a 6-2, 6-0 win over Tanner Coe and Brandon Cook at No.1 doubles.

“This is good for these guys,” BNL coach Donnie Thomas said “Graham started off down, so he has to learn to battle through these. We need that. They need pressure moments like that. They keep thinking one point is going to beat them, and they have to get past that.”