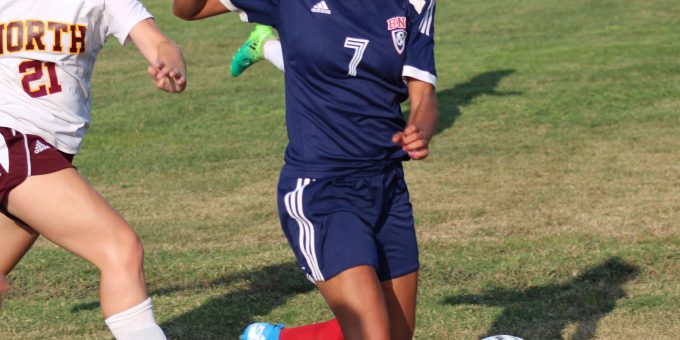 (NASHVILLE) – Bedford North Lawrence exploded for six goals while roaring past Brown County 6-3 for its first victory of the season during girls high school soccer action on Monday afternoon.

Jennifer Ramirez struck three times in the first half and added two second-half assists for the Stars (1-6).

Ramirez got BNL (which had scored only 5 goals in its first six matches) on the board at 30:20 in the first half, then added a second at 24:50 off an Amber Walker assist. She completed her hat trick with 8:54 left before intermission on a Makena Moore pass.

“Jennifer was able to do her thing,” BNL coach D.J. West said. “When she takes defenders on 1-on-1 instead of stopping and trying to beat them from a standstill position, it’s tough to stop her. She can just use her speed and technical ability to push it around the defender and get on goal, She is so good once she gets in the box.

“Where she makes things happen, we have chances to score, and we put them away tonight. That was nice.”

Despite the Ramirez barrage, BNL owned a slim 3-2 lead at the break. But the Stars made a back-line defensive adjustment, and Moore blasted home a pair of second-half goals (33:54 on a Ramirez pass and 32:12 on a free kick from close range).

“They didn’t threaten once we went back to our normal four girls back on the back line,” West said. “The girls have been putting in a lot of work and haven’t had any results go our way. It was nice to get a win.”