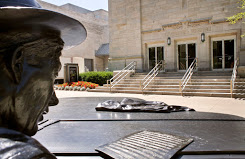 (BLOOMINGTON) – Indiana University Cinema will mark the university’s bicentennial year with an engaging and eclectic fall lineup that includes a monthlong tribute to female filmmakers and the world premiere of a musical score for the newly restored silent film “The Gallery of Monsters.” In addition, several renowned and inspiring guest filmmakers and directors, including score composer the Alloy Orchestra, will visit IU Bloomington for extended on-stage interviews as part of the long-running Jorgensen Guest Filmmaker Series.

Jorgensen series lectures are free, but tickets are required. Visit Jorgensen Guest Filmmaker Series on the IU Cinema website for the full list of events, times, locations and ticket information.

“We are thrilled once again to bring such a talented and diverse line-up of filmmakers in the Jorgensen series, each sharing their unique perspectives and voices with our audience. We are also proud to support Alloy Orchestra’s newest project, which will tour the U.S. following the premiere in Bloomington and carry news of IU’s bicentennial celebration forward. In addition to these events, there is so much more to be excited about in this semester’s program.” — Jon Vickers, founding director of IU Cinema

“The backbone of IU Cinema’s program is our programming collaborations with campus and community groups. Each semester, nearly half of what we present is done in partnership. This fall, we’re delighted to be teaming up with an incredible array of collaborators — from the Black Film/Center Archive to the Turkish Flagship Program to the Jacobs School of Music — to bring to IU an exciting slate of visiting artists, contemporary arthouse films, cult classics and repertory movies from around the world and across all genres and decades. In the months ahead, we’ll be presenting more than 100 films, made from 1911 through 2019; our fall program will be its own semester-long class in film history.” — Brittany D. Friesner, IU Cinema associate director.

Information from News at IU Bloomington