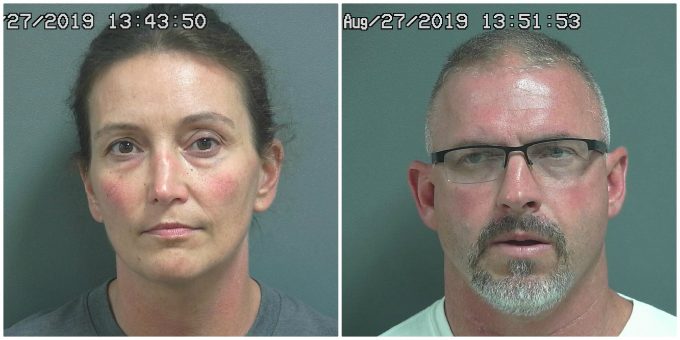 (LINTON) – A Linton couple was arrested on Tuesday in connection to an August 4th fire that destroyed their log home.

The arrest was made by personnel from the State Fire Marshal’s Office and was assisted by officers from the Linton Police Department.

When asked where she was the night of the fire, Crystal Ferree allegedly said she left home around 11 a.m. that day and went to Bloomington with her son. She said the two went shopping then went to McCormick’s Creek State Park to go hiking and then spent the night at the park. They returned home early Monday morning after learning their house was on fire.

On August 8, a search warrant was granted for the Ferree Log Home business property to look for evidence including the surveillance system with storage device and all electronic media stored on the system as well as jewelry, photographs, cash, important documents, medication, guns, electronics and pets.

After reviewing the information, items, and evidence, on August 8, the investigator changed the classification of the fire from “undetermined” to “incendiary.”

Investigators determined the surveillance system was shut off on August 4 at 2:23 p.m. and turned back on at 3:29 p.m. on August 5. Investigators found text messages including arguments between the couple over money and bills and over being unfaithful to each other. They also found a message that mentioned Crystal was “prepping.” The surveillance system allegedly recorded some of that “prepping.”

Ramey reported the system was recording on August 3, the day before the fire, around 2 p.m. when Crystal Ferree backed her SUV up to the office building and unloaded three plastic totes and a white trash bag out of her vehicle into the office building where they were found during the search.

GPS data from the couple’s cell phones was analyzed by Deputy Indiana State Fire Marshal Joe Tanasovich who is tasked with reviewing and analyzing cell phone data and provided more information on their whereabouts the night of the fire.

Jeremy and Crystal Ferree were both booked into the Greene County Jail where their bonds were set at $30,000 surety with ten percent cash allowed. At 5 p.m. Tuesday, Jeremy Ferree posted bond and was released. Crystal Ferree remains in jail.