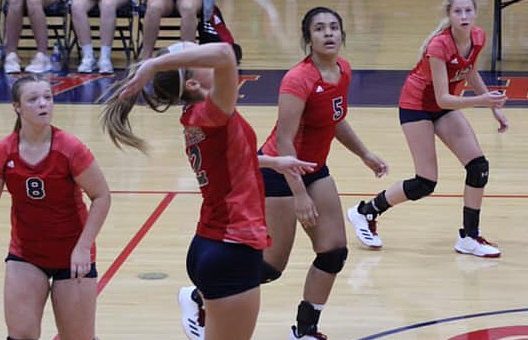 (BEDFORD) – Bedford North Lawrence is still waiting for the ball to drop, at least on the right side of the net.

Lacking spark, perhaps still recovering from a four-set road battle the previous night, the Stars failed to fire as Bloomfield swept to a 25-20, 25-18, 25-16 victory on Tuesday night at BNL Fieldhouse.

Kylee Shelton paced the Cardinals (4-1) with 11 kills and 15 digs, while the Stars (0-5) struggled with serve reception, with sharp passing, with lighting a fire. The young Stars, relying on underclassmen in key roles, took a step backward.

“It was really disappointing, just the lack of effort,” BNL coach Jordan Robbins said. “It was not there. It was just weird. And there wasn’t anything to cheer for.”

Bloomfield won every set in similar fashion – play even until the midpoint, pull free with a run, and close it out without threat of retaliation.

Malea Ramsey had 22 assists, Elizabeth Combs totaled 8 kills, Gracie Lowery added 5 kills, and Cassity Harris had 10 digs for the Cardinals, who conquered the Stars for the second straight season.

“Our passing was much better, and our hitters were actually hitting hard tonight,” Bloomfield coach Deanna Potts said. “Bedford is a very scrappy team. Once their hitters get it together, they could be a hard team to beat.”

BNL has work to do before hitters get involved. The Stars were only 11 of 27 on serve reception and missed 5 serves. That’s one reason the stat sheet revealed minimal offensive numbers.

“We’re leaving our defense out to dry,” Robbins said. “We had been progressing. Tonight we didn’t do that.”

BNL, which has now lost 23 of 24 matches over the last two seasons, will visit Jennings County on Thursday.