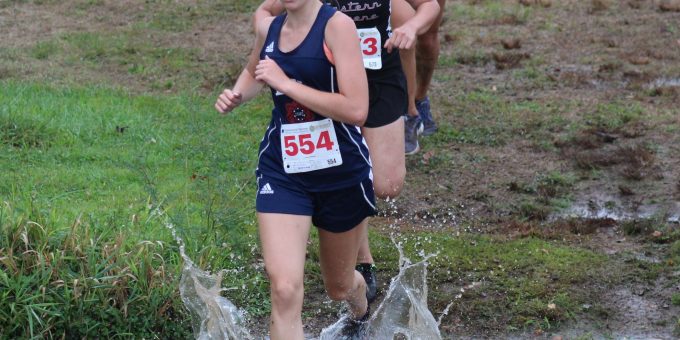 (BEDFORD) – Without traction, without mud tires and 4-wheel drive, Bedford North Lawrence sloshed its way to impressive conclusions. Glancing at the runners ahead, rather than the watch on their wrist, powered the Stars through a wet Scott Hiles Invitational on Monday afternoon.

Running with the purpose of passing, BNL finished second in the nine-team girls race on its home course, totaling 90 points. Seymour won the team title with the top three finishers and a sparkling score of 19 points. The Stars were third among 10 teams in the boys race.

Splattered but not stirred, BNL sophomore Grace Tanksley glided over the muck and mud, crossing the line in fourth place (22:24.58) to help the Stars reach their target team position.

She’s had more fun on other race days, but mental toughness was Tanksley’s key. This was true cross country, with water hazards and murky trails to traverse and conquer.

“We were all in the same race, we were all suffering the same way,” Tanksley said. “You had to keep that mindset. Understand they were running thorugh the mud, too. It was bad. The mud was everywhere, too many times to count.”

“We were running for position, that’s what we were worried about,” BNL coach Jill Vance said. “So I’m pretty happy with this. We were going for second, knowing Seymour was going to be dominant. And the course conditions were abysmal.”

Seymour’s Makenna Sunbury was the individual winner in 20:55.61.

In the boys race, Bloomington North – as expected – had a cavalry charge of leaders with four among the first five finishers (for a winning team total of 20 points). But BNL’s Cooper Holmes kept pace, just a few strides back, and crossed in sixth (clipped at the wire by .19 seconds for the next spot) in 17:34.19.

“We know they do that, so we follow them and stay within a good distance,” Holmes said. “We kind of use them as pacers. It was pretty sloppy, but I’ll take the place. We came in racing today, rather than going for times. It’s good to get races in.”

How sloppy was it? One runner made the finish line without shoes, lost somewhere on the two course loops that comprise the 5k track.

Seymour was second with 54 points while the Stars (with Isaak Gilbert, one of their top runners, sidelined with an injury) posted 81.

“I was very impressed,” BNL coach Jon Calhoun said. “We had less than two days rest (after the Tiger Run in Louisville on Saturday), and we knew it would be a messed-up course. But we weren’t worried about the times, just making sure we tried to compete. We got tested today.”

North’s Paul Rushton was the individual champion in 16:37.91.

The Stars will return to action at Columbus North on Sept. 7. The BNL girls will race in the North Harrison Invitational on Sept. 5.