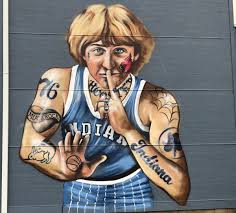 (UNDATED) – Larry Bird likes the mural but not the tattoos.

A lawyer for the former NBA star has asked an artist to remove certain tattoos from a large painting of Bird on an Indianapolis multi-family residence. The tattoos include two rabbits mating on his right arm and spider web on a shoulder.

Artist Jules Muck painted Bird in a blue basketball uniform. It’s a replica of a 1977 Sports Illustrated cover when he played for Indiana State.

Attorney Gary Sallee says Bird “needs to protect” his brand and “doesn’t want to be seen as a tattooed guy.” Muck says she adds things like tattoos to her art to avoid creating a complete copy of a photo.

She says she’s trying to reach an agreement with Bird’s representatives.