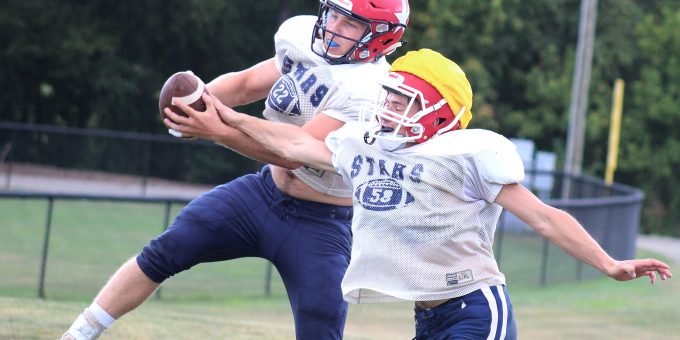 (BEDFORD) – The options will be many, but they are actually few. Bedford North Lawrence’s triple-choice, fake-and-dash, smoke-the-tires offense will still be in vogue, it’s the number of interchangeable pieces that has tightened.

Depth is a concern as the Stars continue the preparatory work for the 2019 campaign, with new faces in key positions and little margin for error. That’s why the annual IHSAA sanctioned scrimmage with county rival Mitchell on Friday night is so vital.

BNL needs a proving ground, against hostile challengers, before the outcomes count, starting on Aug. 23 at Martinsville. This preseason exercise has added significance as the Stars search for a jolt of confidence and some validation before launching missiles into enemy territory next week.

How will that high-octane offense accelerate with four multi-year starters now playing on the college level? Will the revamped defense start lifting its share of the load? Can the Stars reload and maintain the success of last season?

The first answers will be revealed when Mitchell, with its own issues to resolve, visits BNL Field at 7 p.m. Each coach will use the workout as a measuring device, hoping their team doesn’t fall short.

BNL coach Steve Weber, starting his seventh season with the program, approaches the scrimmage with guarded optimism, remembering how former teams have stumbled, even eaten some grass, in this emotional encounter. It’s like T-ball baseball games: Nobody keeps an official score, but everyone is keeping score.

“It’s hard to look good in a scrimmage,” Weber said. “Even last year, with the best team we’ve had (8-3) since I’ve been here, we didn’t look good. Everyone is going to play, and it’s hard to play 60 kids and look good because of the timing.”

Weber will use a shuffle system to give everyone who has earned a shot some partial playing time. That doesn’t mean the spotlight will shine less on new quarterback Dalton Nikirk, who’s replacing a three-year star (McCall Ray, now at Indiana University) in the backfield, or that his receiving corps won’t be scrutinized as a replacement for All-State wideout Drew Shoufler is sought, or that the restructured offensive line will be sneaking under the radar.

“We won’t measure success in terms of moving the ball or scoring,” Weber said. “We’ll be looking to do things the right way, execute and do the job.”

If any unit will be looking for a foundation, it will be BNL’s defense, which allowed 31.8 points per game a year ago. The Stars will be seeking immediate results, both from their first unit and the potential back-ups still being evaluated.

The Bluejackets, on the flip side, will be assessing similar properties – without as many available options. Mitchell will have only 29 athletes in uniform, which means several freshmen will be initiated by fire.

“We have a good core group, just not a lot of them,” Mitchell veteran coach Troy Pritchett said. “We’re really pleased with the dedication we have, but we’re going to have a very young team, especially in the areas of offensive and defensive line. We’ll have freshmen playing in some key spots, because that’s what we have, so it’s on-the-job training. We won’t know until we line up against somebody else.”

The Bluejackets enjoyed their third straight winning season last year and set records in the process. They churned out 3,033 rushing yards (a team season mark), and hard-nosed back Brandon Brazzell finished as the school’s career rushing leader with 3,874 yards and 42 touchdowns.

Mitchell, which will feature Dorian Duncan in its new backfield, will explore some other options, like a few more passing attempts, but don’t count on that. BNL’s run defense and interior fortitude will be tested.

Pritchett will be able to see how his inexperienced kids react under fire.

“The advantage for us is we know we’ll get a solid player lined up against us at about every position,” he said. “They don’t have a lot of weak links, so this is a chance to see where we are. There’s a big difference between a 14-year-old and a 17- or 18-year old.”

Mitchell will open the season at Edgewood.