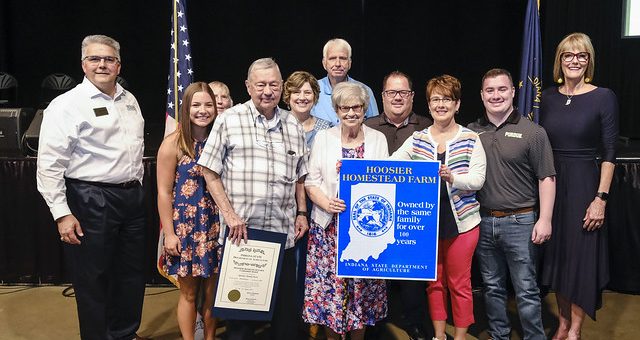 (STATEHOUSE) – On Tuesday, area legislators announced a recipient of the Hoosier Homestead Award, which recognizes farms that have been owned and maintained by the same family for 100 years or more.

The Hoosier Homestead Award Program honors families that have made significant contributions to Indiana agriculture. The program, instituted in 1976, recognizes the impact these family farms have made to the economic, cultural and social advancements of Indiana. In the past 40 years, more than 5,500 farms have received the honor.

“Agriculture plays a key role in Indiana’s economy, contributing more than $31 billion to our state’s economy,” Koch said. “I commend the Speakers for their efforts in reaching this historic milestone and look to see their success multiply for generations to come.”

“Maintaining a farm for more than 100 years and passing it through the generations is an incredible accomplishment that builds longstanding traditions,” Lauer said. “Families like the Speakers are a great testament to the values of Indiana’s hardworking Hoosiers.”

To be named a Hoosier Homestead, farms must be owned by the same family for at least 100 consecutive years and consist of more than 20 acres or produce more than $1,000 of agricultural products per year. The award distinctions are Centennial, Sesquicentennial and Bicentennial – for 100, 150 and 200 years respectively.