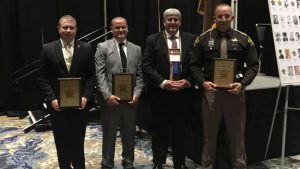 (DAVIESS CO.) – Three Daviess County Sheriff’s Department staff members were honored for their efforts in saving the lives of others.

On March 6, Williams was returning home from a training session when a woman flagged him down on Troy Road. Williams used the Heimlich maneuver to dislodge a piece of hard candy from the throat of a 7-year-old who was choking.

On March 26, jail officers Goble and Mott located an unresponsive inmate in the Daviess County Security Center. They performed CPR on the inmate and summonsed medical assistance for the inmate.

Sheriff Gary Allison praised his staff members saying, without their quick and efficient actions these incidents could have resulted in a loss of life.