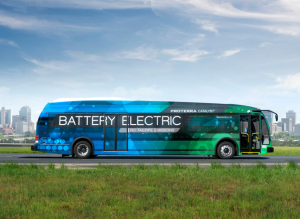 (BLOOMINGTON) – The Federal Transit Administration (FTA) has announced that it will fully fund the Bloomington Public Transportation Corporation (BPTC)’s request for a federal Low or No Emission (Low-No) Grant in the amount of $284,799 to complete the funding of the transit agency’s second battery-electric bus.

BPTC operates the Bloomington Transit (BT) system.  BPTC plans to combine the Low-No grant award with a previously awarded Indiana Department of Transportation (INDOT) grant of $515,000, along with local funds, to purchase one battery-electric vehicle and charging infrastructure.

Budget authority for the purchase of a second battery-electric bus is pending City’s Council’s passage of an additional appropriation ordinance, which BT General Manager Lew May will request at the body’s August 14 meeting. The meeting starts at 6:30 p.m. in Council Chambers at City Hall (401 North Morton Street).

Adding a second electric vehicle to BT’s fleet aligns with the City of Bloomington’s goals as represented in the 2018 Comprehensive Plan to promote environmentally sustainable transportation options for Bloomington residents.  Battery electric vehicles promise many benefits for BT and the community, including the following:

“One way Bloomington actively tackles the challenge of climate change is by improving our transit system,” said Mayor John Hamilton.  “With the help of these federal funds and previously allocated state funds, we can adopt new technology to make an efficient transportation option even more sustainable.”

Bloomington was the only Indiana city to win a Low-No grant in the fiscal year 2019.  The FTA established the Low or No Emission Program in 2015 to help communities transition to the next generation of more sustainable, technologically advanced transit vehicles. Low-No grant applications are evaluated by an FTA technical evaluation committee according to several key areas: demonstration of need, demonstration of benefits (e.g. reduced energy consumption and direct carbon emissions), and planning and alignment with local/regional priorities.  A total of $85 million was awarded nationwide.

Pending council approval of the additional appropriation ordinance, the BT Board will make a decision on a bus manufacturer before the end of the year and award a contract for this vehicle and the one that was originally budgeted for 2019. The procurement phase for both vehicles — including the selection of a manufacturer — would take place by the end of 2019, with the delivery of both vehicles expected in late 2020 or early 2021, considering current lead times for battery electric vehicles of 12-14 months.

“As BT pivots to an ever more innovative and sustainable model,” said May, “the experience of having two battery electric vehicles in operation will help inform the technological direction we take.”