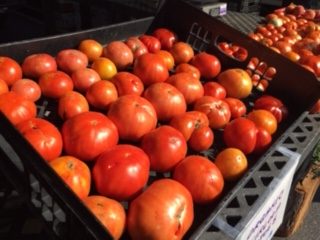 (BLOOMINGTON) – The Bloomington Farmer’s Market was in full swing on Saturday, bringing the community out for fresh produce, music, and conversation in the town square.

“It has been a beautiful day for the market, today we have the Bloomington Community Band to highlight our music as well as street musicians throughout the market. Corn is starting to sell after a difficult year with the weather, and we celebrate the 29th Anniversary of American With Disabilities Act,” said the Leslie Brinson Community Events Director City of Bloomington.

“We encourage the community to come out and support our local farmers. Next week there is a Salsa Contest on August 2nd, and then a tomato-tasting on August 17th,” added Brinson.

“Attendance has been down this year due to the weather. But, we have events planned all the way to the last day in November, which will conclude this year’s Farmer’s Market,” exclaimed Brinson.

There is always some form of music planned for the marketplace. Matt Caldwell is one of the many musicians playing Saturday. “I always like playing in front of people; brings up an interesting conversation. I go to Nashville, Indiana and play up there in Brown County, also. But music brings people together,” Caldwell said.

The City of Bloomington, along with the Council for Community Accessibility, celebrated the 29th Anniversary of the Americans with Disabilities Act. CCA is a volunteer group that advocates for the interests of persons with disabilities, promotes awareness of the challenges these individuals face and works to develop solutions for them.

The following agencies were represented with information/activity stations at Plaza 1A on the B-Line Trail (next to the farmers market). The organizations included the Monroe County Library, Stone Belt, Indiana Institute on Disability and Community, Down Syndrome Family Connection, National Alliance on Mental Health, Ivy Tech Community College, ARC of Indiana, LifeDesigns,

“Our organization actually started long before the Americans with Disabilities Act was even passed. Bloomington, being a progressive city, was already working on ways to improve life and environment for those with disabilities,” said Susan Russ Activities and Events Coordinator for the CCA.

“Our group is action-focused. We just do not sit down and talk about a topic, or issue, we get those issues resolved,” added Russ. Russ worked alongside the late Patrick Robbins and now works with Cindy Elliott at Bedford ARC.

One of the founding members of the group was David Carter. Carter was paralyzed following an accident in which he fell out of a barn. “In getting around before the ADA, there was not any place for a person with disabilities to access sidewalks. You had to ride down to the next curb cut and sometimes those did not have access for a wheelchair to get over,” Carter stated. A gentleman in Spencer, Indiana was riding in the streets which sparked residents from the community to write in to the local newspaper questioning what he was doing.  “Well, he did not have access to the sidewalk, and it was the only place for him to walk,” stated Carter.

The ongoing issue at the Bloomington’s Farmers Market has been the controversy of protest of the Schooner Creek Farm booth.

The issue centers around whether the vendor supports white supremacy.  James Hovious, of Bloomington, confronted the group leading the protest against the vendor.

Officials say the vendor has every right to be there, just as much as they have a right to protest.

James Hovious has also asked the group to denounce the vandalism along the B-Line Trail.

“If you do not, people will associate you with it,” said Hovious.

The group responded by saying they were not responsible for the vandalism. But, it is also costly to add the disclaimer to their print material.

Sarah Dye Schooner Farms said, “all I want is to sell produce.” Dye had no further comment.

The protest at the market has continued over the last three weeks, which has escalated into protestors wearing masks and confronting the vendor.

During WBIW’s coverage of the protests, the protestors shielded their faces from being photographed. Around 11 a.m. a protestor was arrested by Bloomington Police Department on a charge of misdemeanor trespass. Cara Caddoo, 40, of 1911 Nancy Street, was arrested. According to police, she was taken to Monroe County Jail and released around 1:35 p.m.

Bloomington officials say the protests are affecting the attendance of the market. Officials say there are concerns that the protests will turn violent and vendors should not have to worry about not selling their products during the farmer’s market.