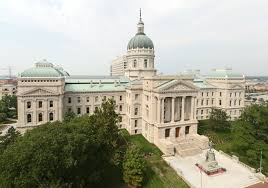 (INDIANAPOLIS) — A $1.1 million fountain outside the Indiana Statehouse is being repaired after not working since 2017.

The fountain was the centerpiece of a Statehouse plaza project advanced by then-Gov. Mike Pence to mark Indiana’s 2016 bicentennial of statehood. It operated through the summer of 2017 but broke over the next winter.

Indiana Department of Administration commissioner Lesley Crane tells The (Fort Wayne) Journal Gazette that it took time to find a vendor to repair the control panel. The fountain could be operational again by mid-August.

Crane says the control panel repair is costing $46,000, while a second company will reinstall it.Information from: The Journal Gazette, http://www.journalgazette.net