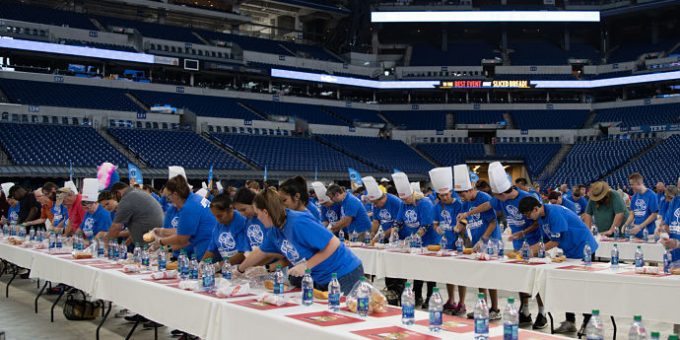 (INDIANAPOLIS) – Dallas has easily held off Indy’s effort to dislodge its entry in the Guinness Book of World Records, for most people making sandwiches at the same time.

About 800 people filed onto the field at Lucas Oil Stadium to assemble three-thousand turkey and ham-and-cheese sandwiches. That’s not even a third of the way to the record set in 2014, at a kickoff event for the food nonprofit TangoTab, which partners with restaurants to steer a portion of your check to local food banks.

15 Guinness Book authenticators were on hand to take an official count of the sandwich-makers. Guinness’s Philip Robertson acknowledges some might see the sandwich record as trivial next to the record book’s stock-in-trade entries for the world’s heaviest man or largest mustache. But he says the book gives consideration to anything which sees people strive to stretch the boundaries of what they can accomplish, as long as it’s quantifiable and repeatable for those who want to stretch the record further.

Subway successfully persuaded the Guinness Book to add the record seven years ago. It crept slowly upward until TangoTab shattered it.

The convenience store chain Getgo organized the Indianapolis effort to raise its profile as it expands its presence in Indiana. The company recently bought the Indiana-based Ricker’s store chain.

Among those making sandwiches and revving up the crowd was Adam Richman, the former star of the Travel Channel series “Man Vs. Food.” Richman works with Getgo’s parent company Giant Eagle, but says the cause of addressing food insecurity is one close to his heart. He’s previously steered donations to homeless missions in New York’s Bowery.

And Richman says he was excited at the chance to be part of a world record himself. He recalls being fascinated by the Guinness Book at nine years old, with its photos of curiosities like 8-foot-11 Robert Wadlow, the tallest man ever.