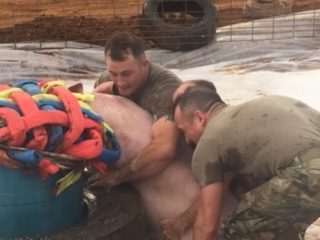 (BEDFORD) – It was an evening of fun at the Lawrence County track where the 4-Hers just got outright down and dirty.

Around 24 teams competed to see who could capture a pig and get it to the barrel in 45 seconds or less. The pig wrestling contest is a big draw at the fair and it did not disappoint this year.

According to Fair Board President Rick Wessel they could have had over 100 teams participate but it was difficult finding pigs and very few people are raising them any more.

“We have to get them the right size, because we do not want anyone to get hurt and especially do not want the pigs getting hurt. After the pigs are in the contest they are taken to another location and never used again.”

Around to 250 people came to watch the spectacle, laughing and enjoying watching the teams get dirty. The National Guard started the evening off, and captured the pig and got it to the barrel in about 22.8 seconds.

The other teams did not fair as well; only really getting their egos hurt. The Lawrence County Wrestling team stated they participated last year and wanted to try their hand at it again. “Surely, being wrestlers we know how to wrestle a pig,” one of them stated.

It was The Baconators’ first year for trying this out. Some had to conquer their fears and just do it. Kaden Mikels, age 9, didn’t know what to think of the event; but got encouragement from fellow team members.

It was a great evening at the fair with just a few sprinkles and cooler temperatures.

A full list of events are listed below. Click on the image to view a larger version.