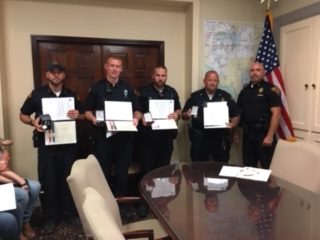 After some bad storms went through the area on April 18, 2019 four juveniles were playing in a storm drain on Bedford’s south side. One of those juveniles got trapped in the storm drain.

The other children who got out were able to flag down a police officer in the area. The child was stuck approximately 20 feet from the manhole to which the line is only 3 to 4 feet in diameter.

Officers first attempted using a rope to throw down to the youth but that did not work. Officer Jeremy Bridges then emptied a jug with gun oil in it. He tied it to a rope and it floated down to the youth who was then able to get a hold of it and they pulled him out to safety.

The officers are not trained in Swift Water Rescue but because of their quick actions and thought process the child was able to be rescued. The Lawrence County Police Department also assisted the Bedford officers in their efforts.

The youth was taken to the hospital treated and released. If it was a smaller child the outcome may have not been so lucky, especially if they traveled down to where a lift station is located because the storm drain would lead to a near-by lift station and it is underground. They would have had to dig to gain access.