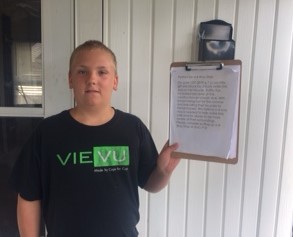 (BEDFORD) – The Bedford Board of Works approved Danny Irwin’s request for a four-way stop at 2nd and P Streets.

Irwin’s 12-year-old son Cameron worked hard to obtain petition signatures for the stop sign after his friend 7-tear-old Kristen Ray suffered bumps, bruises, lacerations and a broken leg after she road her bike into a path of a vehicle at the intersection of 2nd and P Streets.

Police Chief Terry Moore says that this has been a conversation after the accident. Chief Moore reports that 56 local adults signed the petition in addition to one other person not from the area. There were around 16 other signatures written by children under the age of 18 to which Councilman Bryon Buker questioned.

Danny Irwin is a Bedford Police officer and resides in the neighborhood, who provided assistance to the young girl until the ambulance arrived.