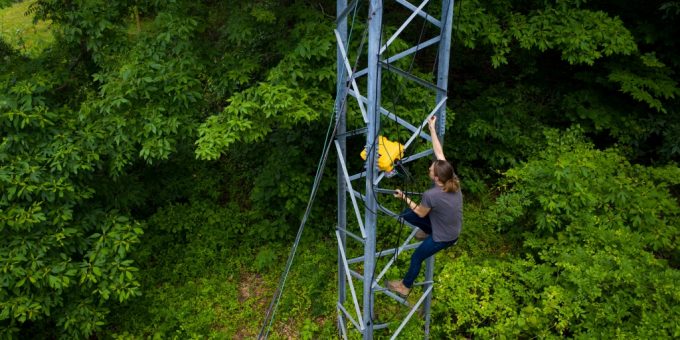 (BLOOMINGTON) – Researchers with Indiana University’s Environmental Resilience Institute, founded as part of IU’s Prepared for Environmental Change Grand Challenge Initiative, are now tracking the migration habits of animals such as birds and insects thanks to the addition of a new Motus Wildlife Tracking System station at T.C. Steele State Historic Site in Nashville, Indiana.

Kelsey Cook, of News at IU Bloomington reports the Motus Wildlife Tracking System, a program of Bird Studies Canada, is an international, collaborative research network designed to track wildlife movement, with the goal of understanding the importance of various habitats and how they are used through migratory species’ annual cycle. The system has 702 stations — including three in Indiana — in 28 countries on four continents; 184 species and 18,723 animals have been tagged as part of these efforts.

“This station will contribute to the larger network of global monitoring and will help us better understand how changes in Indiana’s climate are impacting the timing and movement of migratory animals,” said Allison Byrd, Environmental Resilience Institute research associate. “As we gain a better understanding of these processes, we will enable lawmakers and other stakeholders to make ecologically informed decisions in regard to policy, land use and conservation, and wildlife management.”

Each Motus station consists of just two to five antennas, cables, a small receiver and a power source. Receivers require minimal power, so even remote stations can operate using a small solar panel.

Animals to be tracked are fitted with a small transmitting device called a nanotag, and all birds, bats or insects wearing one will be detected by any Motus station it travels by. The small, digitally encoded radio transmitters allow animals’ movements to be detected by stations that scan for signals 24 hours a day, 7 days a week and 365 days a year.

“Detections by numerous Motus stations can determine migratory routes, migratory speed, regional movement and stopover ecology,” said Byrd, who will be responsible for downloading the data and uploading it into a master database for researchers. Interactive maps of station locations, migratory route tracking and information on the species tagged worldwide are all currently accessible on the Motus website.

T.C. Steele State Historic Site is within the Mississippi Flyway, a known migratory pathway for birds. This, in addition to its location on top of a ridge that gives the antenna the greatest possible reach, makes it an ideal location for a Motus station. It also overlooks IU’s Kent Farm research station, which means birds tagged at this location will likely be picked up by the historic site’s Motus tower as they fly above the tree line.

“The ability to track small mammals, or even insects, in real time is very exciting,” said Damon Lowe, senior curator of science and technology and curator of biology at the Indiana State Museum and Historic Sites. “Being part of a network that can track them from Canada to South America and adding to that body of scientific knowledge is amazing.”

A pilot project is planned for the spring at the new Motus station. Environmental Resilience Institute researchers plan to tag 20 juncos wintering in Indiana to learn about the timing of their departure from the wintering ground as it relates to other variables such as their condition and migratory distance. Other projects to monitor bird migration are also being planned for the coming year.

The Indiana University Prepared for Environmental Change Grand Challenge initiative brings together a broad, bipartisan coalition of government, business, nonprofit and community leaders to help Indiana better prepare for the challenges that environmental changes bring to our economy, health and livelihood. Announced in May 2017, Prepared for Environmental Change is working to deliver tailored and actionable solutions to communities across the state of Indiana.

Kelsey Cook is associate director of research communications at IUPUI.