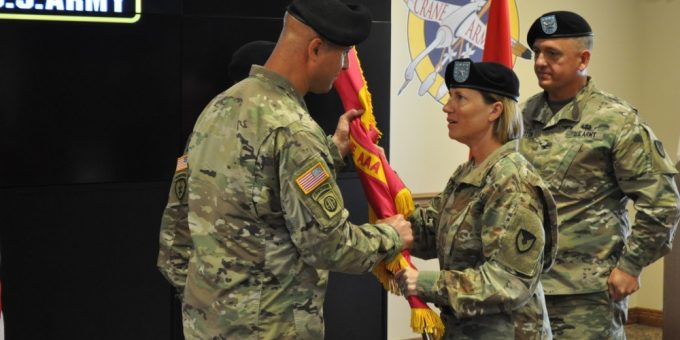 The change of command ceremony symbolizes a peaceful military transition of power that recognizes the outgoing commander’s accomplishments while welcoming the incoming commander to the organization.

Letcher spoke about how Dondero is the right leader to build upon the standard of excellence at Crane Army.

“I have great confidence in Stephen and his ability to lead Crane Army and excel in this joint environment,” Letcher said. “He will continue to serve Crane, JMC and the Army well.”

During his welcome speech, Dondero expressed his gratitude and desire to lead the organization.

“I’m grateful to lead and serve, with the help of the experts and the support of my family, in such a great logistical operation,” Dondero said. “I’m grateful to be supported by a dedicated team providing ready, reliable and lethal munitions to America’s Warfighters.”

“Mike is a high level Army officer who is known for his responsibility and leadership,” Letcher said. “He continues to impress me. I know, without a doubt, as he retires from the Army, he will continue to benefit this nation in his future position.”

During Garlington’s speech, he focused on the work ethic and dedication of the CAAA employees.

“Today culminates two years, two weeks of commanding the best damn ammo depot in the world,” Garlington said. “I want to thank the workforce for their duty and sacrifice. Everyday this workforce shows up, rolls up their sleeves and serves our nation to provide quality munitions to the Warfighter.”

Garlington will retire after serving 27 years in the U.S. Army.

Crane Army Ammunition Activity produces and provides conventional munitions requirements in support of U.S. Army and Joint Force readiness. It is one of 17 installations of the Joint Munitions Command and one of 23 organic industrial bases under the U.S. Army Materiel Command, which include arsenals, depots, activities and ammunition plants. Established Oct. 1977, it is located on Naval Support Activity Crane.