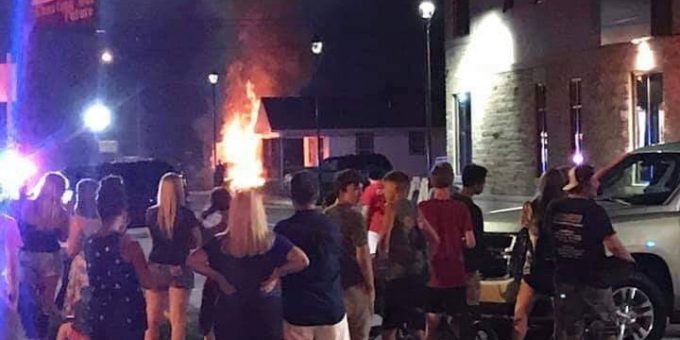 (BEDFORD) – The Bedford fireworks display was briefly interrupted by a shrubbery fire on Saturday evening.

About twenty minutes into the fireworks show smoke was seen billowing from behind the Lawrence County Museum.

Hot embers from the fireworks caught the shrubbery on fire and it was quickly extinguished by the Bedford Fire Department.

The show was halted for about five minutes while firefighters extinguished the blaze. Many of the spectators left as the fireworks just stopped with no finale and the courthouse lights started to come back on.

The fireworks resumed, lasting about another five minutes before the finale of fireworks.

Bedford Fire Chief DeWayne Turpen stated, “This is the reason we stage our fire engines nearby during the displays. The pyrotechnician has a permit from the State Fire Marshal’s Office. The Bedford Fire Department, Bedford Police Department and festival staff keep the public away for their safety. The fire truck was at 14th and J Street when an ember fell onto the shrubbery and it was quickly put out with no damage to the Wiley House. There was damage to the shrubbery and Wiley House sign.”