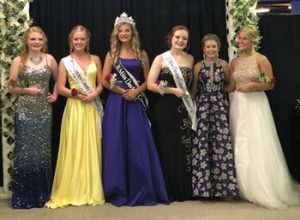 It’s been 2017 since a queen was crowned due to a lack of entries.

The Daviess County Fair runs through Saturday at the fairgrounds in Elnora.

On Friday the fair features the Full Throttle Monster truck at 7:25 pm. and on Saturday, its the Demolition Derby beginning at 7:30 p.m.