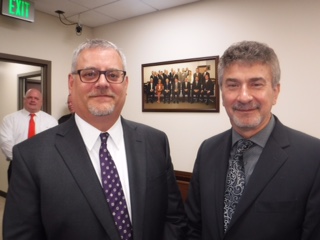 (BEDFORD) – Lawrence County has the only problem-solving court in the State of Indiana for those charged with domestic violence. The court was started several years ago by Judge Michael Robbins.

Although going to court is not always a happy place for many people, Tuesday was a celebration for four men who completed the program and graduated.

106th Supreme Court Justice Steve David came to be a part of the celebration and provide remarks of encouragement to these four men. He even offered his phone number to them if they ever felt discouraged and needing help.

“Life sometimes is not the way it supposed to be, life is the way it is. It is how you cope with it that makes the difference,” Supreme Court Justice Steve David remarked.

Each individual shared how they started out – many with alcohol and drug addictions – that ultimately led down to a road of domestic violence, divorce, and jail.

But Lawrence County had something to offer them to not only keep them from prison. They also offered support for them to be able to identify their issues and find a better way to deal with their anger, addictions, and other issues to get them to a better place.

Ed Parker talked of his 19-year addiction, how his 16-year marriage came to an end and how he was not in a very good place. But he learned how to deal with those issues, learned goal setting, completed AA and NA programs, and completed the 12 step program. He is now a sponsor helping others.

He built better relationship skills, he encouraged future program attendees to stay open and willing to complete the program and you will be happy you did.

Judge Plummer told of a story he read about Ed in the newspaper when he was a manager of the Pizza Hut. At closing time, a school bus broke down out with a ball team. Being the caring person he was he invited the team in, offered them food and drinks and great hospitality. It would have been easy to ignore them, but the coach was so impressed with the hospitality shown in Lawrence County he wrote to the newspaper telling the story.

The Domestic Violence Problem Solving Court has many players who make the program successful.

“The prosecutor takes a risk, the public takes a risk, county commissioners and county council all take a risk with this program,” Judge Plummer added. “The community made an investment in you.”