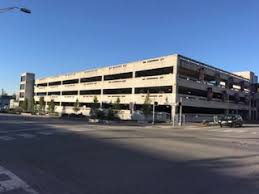 (BLOOMINGTON) – Having been presented to the Bloomington Redevelopment Commission (RDC) in preliminary form June 17, the design for the new Fourth Street Garage will be brought to the City’s Plan Commission on July 8, 2019. The public meeting will take place from 5:30 to 9 p.m. in the Council Chambers at City Hall (401 North Morton Street) and its agenda includes a public comment period.

Since early May, the City has been working with project architect CSO to bring all gathered feedback into the structure’s preliminary design. The design presented to the RDC, the project’s funding entity, calls for a six-story facility with 504 parking spaces, approximately 10,000 square feet of retail space along the facility’s Walnut Street side, LED lighting, bike parking with lockers, and public restrooms. The preliminary design also includes electric vehicle charging stations, rooftop solar panels, natural lighting, and improved signage to assist with wayfinding. The facility will offer entrance/exit locations at both Third and Fourth Streets for optimal traffic flow.  Additionally, the garage will include more ADA parking spots than the existing structure, to be located near the elevators. Materials to be used include brick, prestressed concrete, and vertical metal slats. The facility will feature two glass-enclosed stair towers as a security and design feature.

The public art elements and landscape for the garage are still being determined, and not reflected in the preliminary design.  Additionally, the existing overhead glass walkway at Fourth Street will tie into the new garage.

Demolition of the existing garage is expected to begin in late summer.  The facility remains closed until that time due to safety concerns cited in a structural analysis completed in fall 2018.