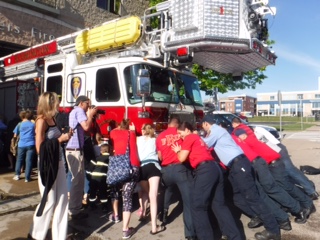 Chief Moore pointed out that the fire service is steeped into tradition, and the pull-in ceremony dates back into the horse-drawn days. The city residents would work together to raise money for the expensive piece of fire equipment.

The tradition recalls the days before motorized fire equipment when garaging a hand-drawn hose cart or a horse-drawn steam engine in the firehouse required a hands-on approach.

The new aerial apparatus will be used across Bloomington and on the Indiana University Campus which is the location of the majority of buildings that will benefit from a 100-foot ladder platform.

In addition to providing the capability for rescues from heights unreachable by ground ladders, an aerial apparatus can provide horizontal reach when road access is limited and when an elevated water stream for a major fire is necessary.

As the first aerial apparatus designed to fit the department’s mission, New Truck 1 will add the capability of filling air cylinders used by firefighters to enter burning buildings and advanced rescue tools including a full complement of extrication equipment.

The price tag of the new aerial came at a cost of $1.2 Million with the City of Bloomington partnering with Indiana University on the purchase of the truck. ” This by far is the biggest purchase I oversaw since I become fire chief. ” Said Jason Moore Fire Chief of Bloomington Fire Department.

“We appreciate Indiana University in partnering with the City for this critical investment,” said Mayor John Hamilton. “The role of updated equipment and enhanced training and prevention efforts in providing top quality fire protection can not be overstated,” Hamilton stated.

Some of those attending were Luke Jackson, 14, who plans on taking the Fire Science Courses offered through Vocational Training as a Junior in High School. This year he will be a freshman. Jackson constructed a Lego version of Truck 1 and it was on display at today’s event.

This will make the third apparatus the fire department has purchased in three years to replace aging equipment and standardize the fleet for increased efficiency.

The new vehicle was purchased with Public Local Income Tax to be reimbursed over a three year period, and a one million dollar contribution from Indiana University.

The Public Local Income Tax has been a revenue source for all the fire department’s major capital improvements including new fire gear, air-packs, vehicles, extrication tools, and fire station improvements and updates.

“Our fire department welcomes this critical piece of equipment that will improve the safety of the residents and firefighters,” said Fire Chief Jason Moore. “Beyond our personnel and the construction of a new fire station, this is the largest investment in public safety that our organization can make. An investment that is only possible with the support of residents, mayor, city council,” Moore concluded.

Truck 1 replaces a 2007 Ferrera aerial platform truck, which will be maintained as the fire department’s first aerial truck. This will provide the city with the same level of service when either of the two aerials serving the City is out of service for repair or preventive maintenance.

Previously, the city was not protected by an aerial platform or had to borrow or rent one from another city when the truck was out of service for repair.