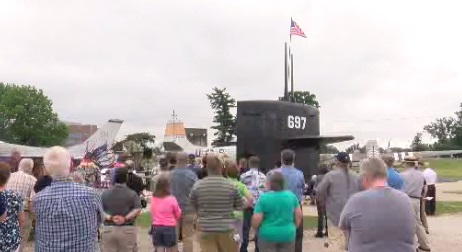 (VINCENNES) – It took six years but a piece of United States history is now on display in the Hoosier state.

A monument to the USS Indianapolis (SSN-6970) nuclear submarine was dedicated during a ceremony at the Indiana Military Museum in Vincennes, Saturday. The monument includes parts of the cold war era sub which was once stationed at Pearl Harbor. This was the third naval ship with the Indianapolis name.

Former crew members, including ship captains, were at ceremony.

Those behind efforts to bring the monument to Indiana say it allows crew members to see it once again and ensures their part in history is preserved.

You can see the monument at the Indiana Military Museum is located on South Sixth Street in Vincennes.