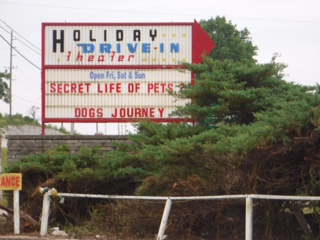 (MITCHELL) – Along State Road 37 between Orleans and Mitchell Indiana lies one of only 348 drive-in theaters in the United States. That figure is down from the 443 theaters in the year 2000.

In 1980, there were more than 2400 drive-in theaters that dotted the United States. The Holiday Drive-in Mitchell opened up for the summer season, hoping for a busy year. There are only nine drive- in’s in the State of Indiana, two are located within thirty minutes of Bedford.

The very first drive-in theater opened in Camden, New Jersey back in 1933, and they exploded from that point on. The industry hit its peak at the end of World War II, during the baby boom of the 1950’s-1960. During the height of their popularity, there were more than 4,600 drive-ins in America.

The Holiday Drive-In is owned and operated by Steve Wilson and his wife Pam from Orleans. The couple recently got married seven months ago. Steve purchased the property about seven years ago.

“This is actually, a seven-days a week job even though we are open only two-three days a week in the summer,” said Steve Wilson. “We have to order food, keep the grounds mowed, and do regular maintenance on the grounds to keep everything in good working order.”

“Digital has made it easy to operate versus the old film type of rolls that took hours to feed into and prepare for the movies,” he added. “However, digital and the equipment to operate it has made it very expensive also. One major repair or malfunction, and it could put me out of business.”

Wilson noted, “to open up a drive-in theater costs would be around $3.5 million. Although there have been a few more drive-ins try to open up, so far the trend of them coming back is still doubtful.”

Wilson says he does this as a hobby, and really enjoys operating the drive-in.

“We want people to have a good time, bring the lawn chairs, and boom boxes. And this provides a great family activity for everyone to enjoy,” he added. “We promote our concession areas which we offer a lot of good food and really that is where we make most of our money. Our concession has soft-serve ice cream in chocolate and vanilla. We just want people to leave the cooking to us. It is basically a restaurant in the movies. We have credit and debit card machines to make it easy for people to purchase food and tickets.”

Several people have come by and visited the drive-in from other states. One couple was traveling the country visiting and taking pictures of all the drive-in’s they could locate.

“Last week, a couple from Chicago came and visited our drive-in while they were trying to find drive-ins,” Wilson said. “On Friday, evening a family from Jasonville came by and visited after just taking pictures at the drive-in in Corydon, they were able to hit a movie up here at our facility.”

Wilson said the operation takes typically seven people to operate, between the concessions and getting things ready. They have been able to keep a well organized and trained staff, which they all work hard to make sure the moviegoers have a good time.

“Daylight savings time has actually affected our business, especially Sunday evenings,” Wilson added. “Because people have to get ready for work, they do not stay out that late. And the weather will affect our business. We hope to have a successful year.”

Most of the moviegoers start arriving around 7:30 p.m. and the first movie usually starting around 9:30 p.m. The features are lasting between one and a half hours to three hours, depending on the type of film or weather affecting the showing.

The cost is $8 for individuals older than 13 and up and $4 for children 6-12 . and free for those under six. Sunday evening is carload night. $20 a carload, limit 6, add $5 for each person about the six individual limit.

The Holiday Drive-In is open Friday, Saturday, and Sunday. The drive-in will remain open until the weather turns bad, usually closing in October.

For more information visit Holiday Drive-In online here or on Facebook or call 812-849-4992.