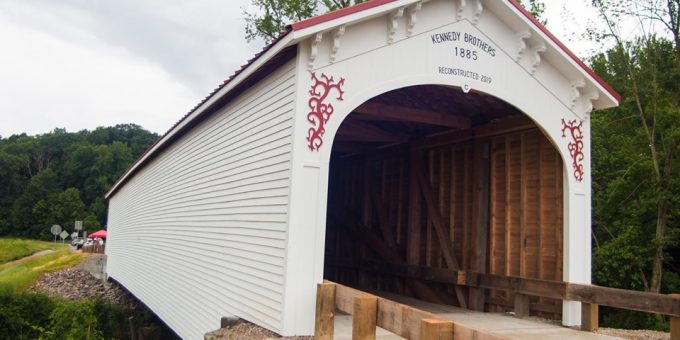 Indiana ranks third among states for the most covered bridges. Monroe County had been without a covered bridge for more than four decades.

Covered Bridge Expert and lead engineer Jim Baker addressed the crowd of around 75 people. Olive Winery was there passing out free samples.

It has been 134 years since the original bridge which was built by the Kennedy Brothers in 1885. Baker located the dismantled 127-foot Burr Arch truss bridge that once spanned the Little Blue River and decided to buy the remnants. Much of the bridge was in bad shape because it had been stored improperly. His goal was to work with Monroe County officials and rebuild the bridge.

President of CLR Inc. Chad Reitmeyer, who was a contractor on the new bridge, says the original bridge cost $2,600, this one $1.6 million.

The bridge now stands about 200 feet east of where the 125-foot Smith Truss covered bridge built in 1871. The name was later changed to Milikan Bridge and also know at Williams Bridge. On June 29, 1976, the bridge was destroyed by arson and never rebuilt.

According to police reports, two young men poured gas on the floor and set it on fire. They then sat back and watched the fire. Bill and Mary Oliver offered a $500 reward and the two men were arrested and convicted.