(COLUMBUS) – A Memorial Day crash in Bartholomew County led to the arrest of a Pekin man.

Deputies were called to the scene of the crash in the 9000 block of South County Road 100 West at about 1:50 p.m. Monday after a report of an SUV upside down. 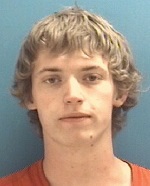 Police say, the driver, 20-year-old Austin Smith was found with marijuana and prescription medication. They also found a handgun in the vehicle, which Smith didn’t have a permit to carry.
He was taken to Columbus Regional Hospital for treatment and then to the Bartholomew County Jail on charges of carrying a handgun without a permit and possession of marijuana and a Schedule IV controlled substance