(SPENCER) – A Spencer sophomore has become a film writer overnight. 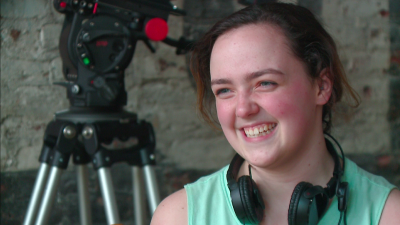 Marjorie Abrell won a statewide script contest with Pigasus Pictures in Bloomington.
The company is in the process of filming and editing her movie.
“Pick a winner, and take a professional film crew to their town, and make a movie with high school students,” detailed John Armstrong with Pigasus Pictures. “The purpose of theatre, or film, is to reflect life. When people watch it, they want to see their lives told because it makes us feel like, ‘I’m not alone in the world.’ I thought that’s exactly what Marjorie’s script did.”
Abrell’s film is a one-day teenage romance where two youngsters randomly meet in a shop. One person falls for the other, then works to get the courage to ask the other to the movies.
The 12-page movie should be around 12 to 13 minutes.
When her film is done, the production company plans to show it around the state in film festivals as well as at the Tivoli Theater in her home town of Spencer.