The Indiana Department of Natural Resources says it received a report March 11 that an animal, possibly a mountain lion, attacked and killed a domestic cat in the 3900 block of Marlett Road in Nashville.

Photo provided by https://www.cougarnet.org
Marlett Road is off Green Valley Road on the edge of Yellowwood State Forest.
DNR staffers collected the pet’s carcass and are examining it. Officers searched the site and found no evidence a mountain lion was responsible for the attack.
“DNR staff collected the domestic cat’s carcass at the site and searched the surrounding area for tracks or other signs of a mountain lion, but no additional evidence of a mountain lion was found, although there were clear tracks of other wildlife typical to the area, such as deer,” says a press release from Marty Benson, the DNR assistant director of communications.
James Halcomb of Nashville said the animal was not a bobcat. It was a large brown cat with a long tail and the size of a small deer.
Halcomb says he raced home after receiving a frantic call from his 20-year-old daughter saying a large cat was eating their Siamese cat.
Halcomb grabbed his beagle and gun and went looking for the large cat believing it was a bobcat. He found it about 50 yards away sitting at the edge of his property line with the Siamese cat still in its mouth. His beagle then took off after it. The cat took off towards Yellowwood Road and then rounded back toward Halcomb and climbed a huge white oak tree. It then turned and made a hissing roar at the dog. It jumped out of that tree, into another, then to the ground and ran into the thick brush.
Brown County Sheriff Department deputies and DNR officers responded. Halcomb told them the animal took off north in the direction of Oak Grove Road.
Det. Brian Shrader was riding in a vehicle with Det. Paul Henderson when the large animal ran out in front of their vehicle.
The DNR states the likelihood of encountering a mountain lion in Indiana is “remote.”
The DNR provides the following advice to people who may encounter an animal such as this:

If you’re attacked, the DNR suggests using big sticks, stones or other available items to fight back.
In Indiana, the mountain lion is protected as an exotic mammal.
The DNR says mountain lions vanished in Indiana by the late 1800s and are a protected exotic mammal. State laws do allow a homeowner or tenant to kill the animal “while it is causing damage to property owned or leased by the landowner or tenant,” the website states.
DNR has confirmed two confirmed sightings of mountain lions – in 2009 in Clay County and 2010 in Greene County. DNR says their proximity makes it possible that this was the same animal. 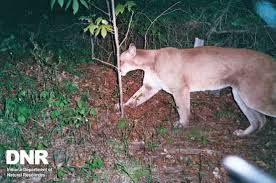 Mountain Lion spotted in Greene County in 2010. Photo courtesy of DNR
Physical Characteristics
Color
Adults range in color from a tawny brown color to a reddish or brown-gray. Kittens are born with spots that gradually disappear after about 2 years.
Height
On all fours, cougars stand 24-26 inches at the shoulder.
Weight
Adults can weigh up to 200 pounds, making cougars the fourth largest cat in the world.
Length
From nose to tail, adult cougars are 6 to 8 feet in length.

Photo provided by https://www.cougarnet.org
“The DNR receives many mountain lion reports through this system. However, most sightings prove to be a species other than a mountain lion, are inconclusive, or are part of an internet hoax,” the site says.
Confirmed reports help inform biologists of dispersal events and management decisions. Photos and videos of large mammals are always helpful.
Data submitted may be shared within DNR and partners with the discretion of DNR staff. Personal information will be used to process your observation and may also be used for participation in surveys and other secondary purposes. A district wildlife biologist may contact you with questions about your observation or to set up a site visit to verify authenticity details of any photos submitted.
Click here to report a sighting.
For more information on identifying big cats, the DNR suggests visiting Cougarnet.org.